Over the last few months I've been making a cushion as a shop sample for Frangipani Fabrics, using Elizabeth Hartman's Hazel Hedgehog pattern. Because the blocks are relatively small (8" x 9" finished), I decided to make a few Hazels rather than making one and having a really wide border around it to make it big enough for a cushion insert. 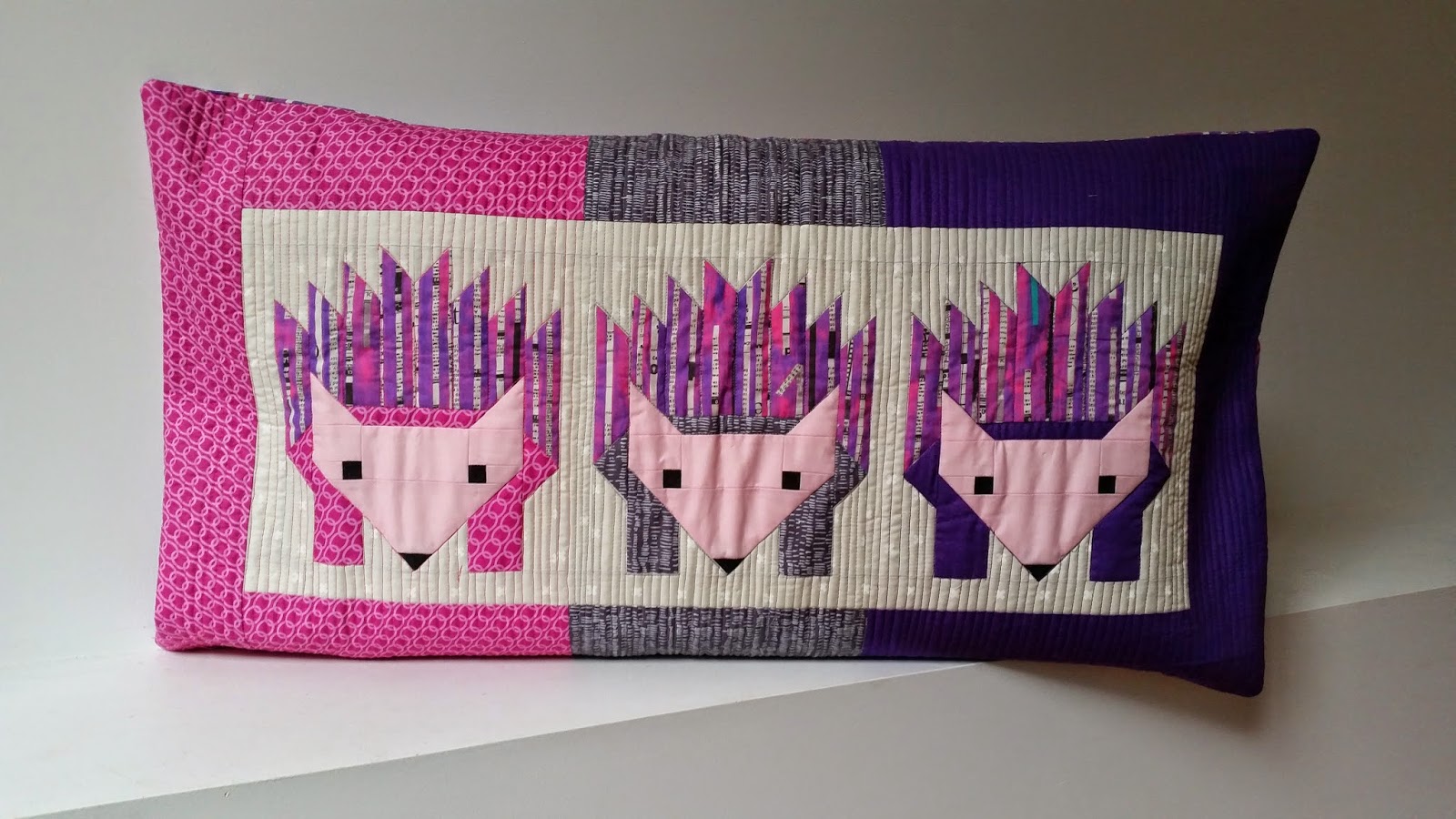 But it in the end it grew, and grew until it was actually about the size of a pillow that you use on your bed. Which brings me to a question that's been bugging me. Here in Australia we call cushions cushions - but for those of you in parts of the world where cushions are called pillows, how do you distinguish the sleeping kind of pillows from the kind you put on the sofa?

Anyway, I digress. I ended up making three Hazel blocks, all using the fabulous purple/pink stripe from Carrie Bloomston's Collage collection for the spines. My Hazels have a distinctly punk look about them. The faces are all a very light pink, and I used a few different tone-on-tone prints for the bodies. 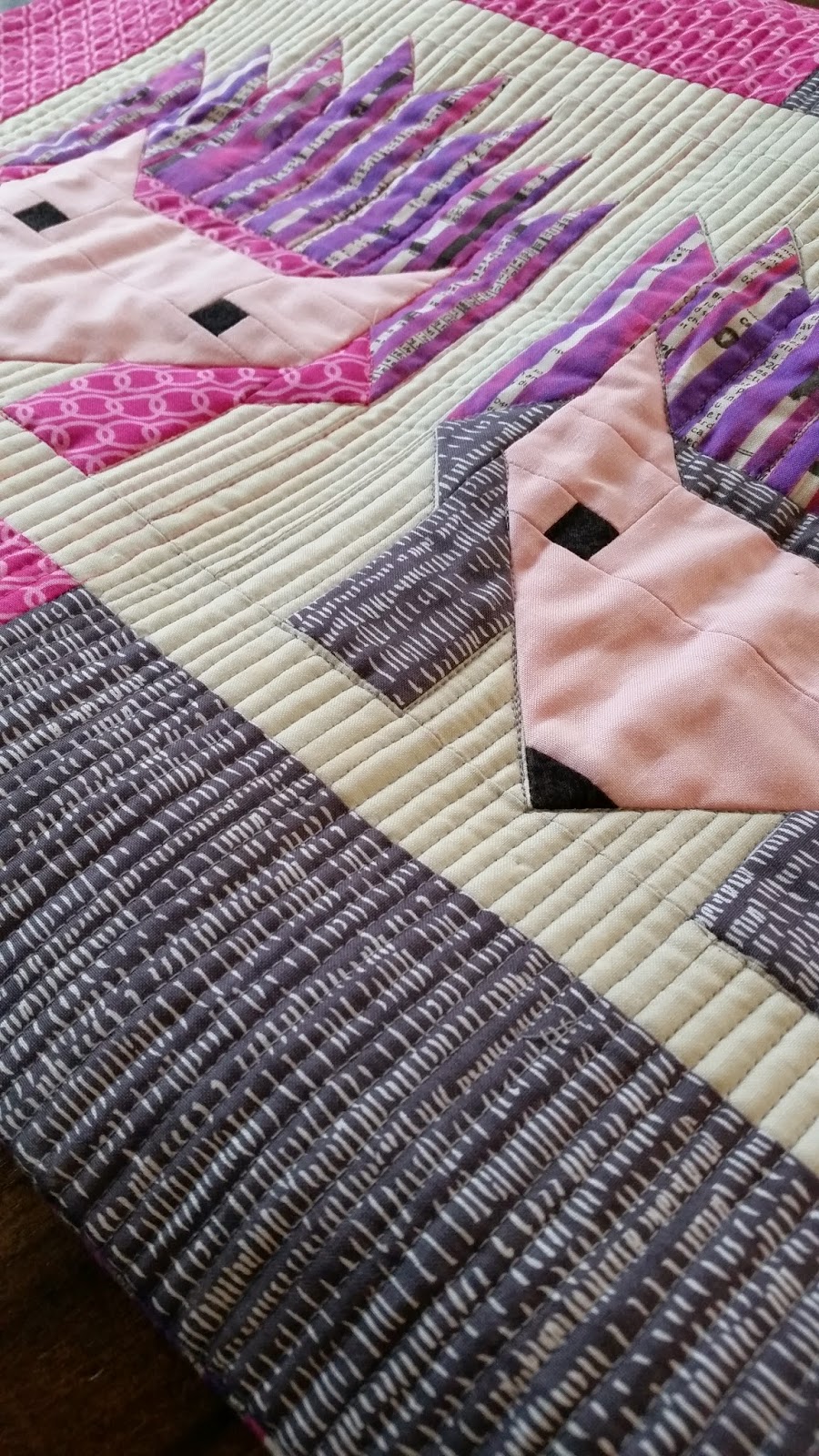 The rest of the cushion front was made up as I went. I ended up doing a pieced border to use up some of the fat quarters I'd been working with, and I like how it has finished up. The quilting is not-quite-matchstick quilting, and I channeled Leanne here and used coloured Aurifil thread (matching the bodies and borders surrounding each Hazel). The lines are FMQed so they are quite organic, but I love the texture this kind of quilting gives. 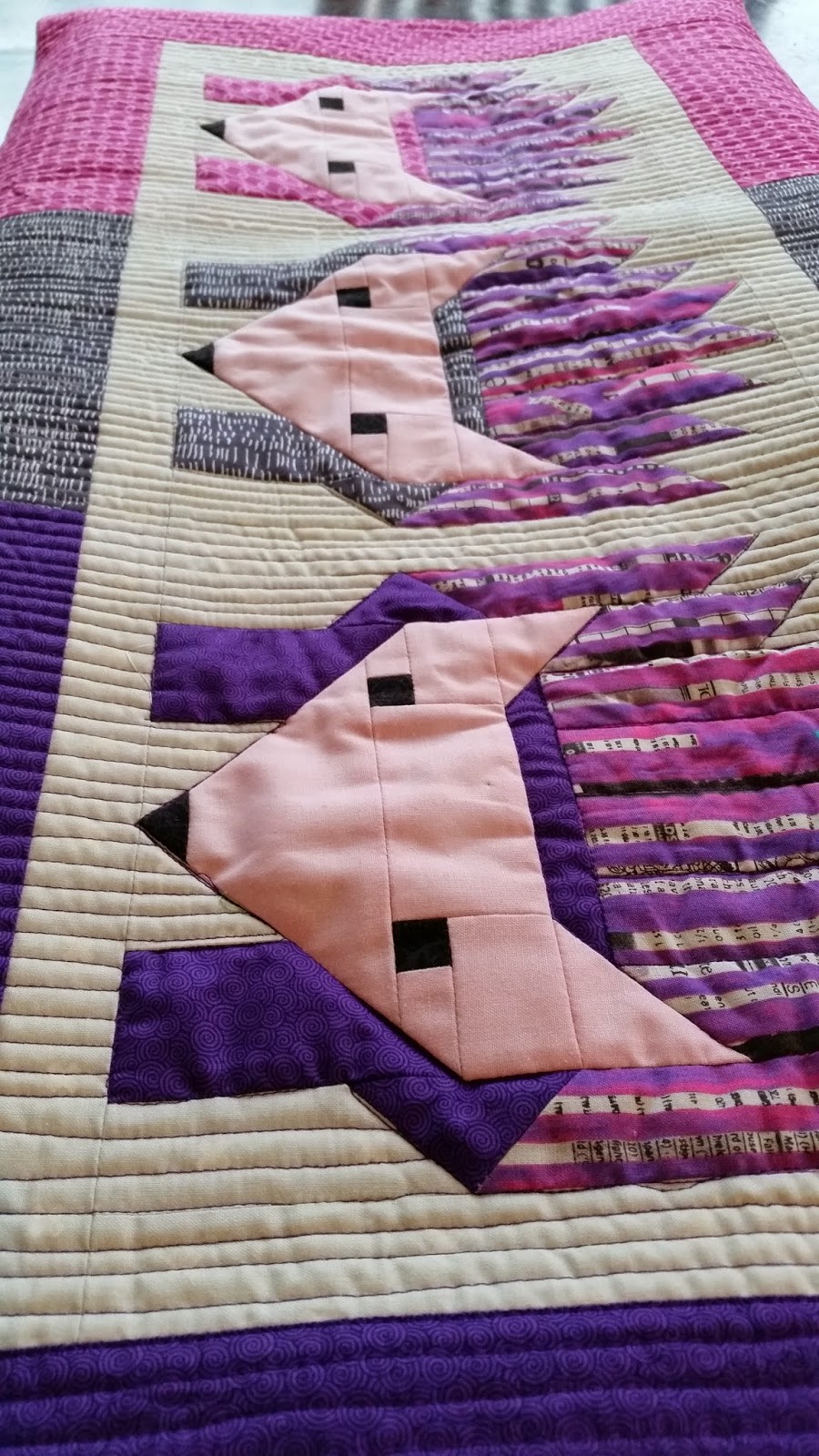 My pre-Christmas sewing involves panic sewing five Christmas stockings, so I'll hopefully be back with some more finishes before Wednesday. Good luck to everyone who is joining me in last-minute holiday sewing ;o) This year is disappearing scarily fast...

I call them both pillows, but pillows for the couch are often called throw pillows. Cushions are the part of the couch you sit on :)

I was going to say exactly what Jill said.

Rosemary B here
Here in the US.... people call them whatever they like.
I hear most often "pillow"
I call everything a cushion, except what I lay my head on at night.. However, just about an hour ago I was leaning into a shelf of batting, a low shelf, on my hands and knees, looking to see if there was an electric outlet behind the side shelf.... whatever, complicated. I put my head on that batting and oh my it felt like a pillow to me
It has been another long day taking care of my beloved 91 year old twins-er, parents.

Oh, and I love your cushion so much

Oh I love love love your Hazels, I have to admit to doing a bit of Hazel stalking lately, and these are my favs!!

I've been wondering the same with cushion/pillow -- especially since cushions can also go on beds, but you don't sleep on those ones...

To be honest it tends to bug me when i see Australians (or British English users in general) start referring to cushions as pillows (and to my shame, I know I've done it from time to time just from having it stuck in my head when looking up tutorials and other posts etc.). I'm just big on not wanting to lose our own language!

That collage stripe cannot be any more perfect for the spikes. Great choice!

Love that cushion - not sure I would call it a pillow! The colours are really beautiful together! And great thinking to have 3!

As users above have mentioned, they're all pillows, but some are "decorative" or "throw" pillows. These are typically covered by shams or covers, whereas the bed variety are covered by pillowcases. In context, it's not confusing.

Love the Hazel Hedgehog cushion! I am from England, now in NZ, and we always referred to them cushions for the couch, the chair etc.

What I call them are... Cute Hazels! I think we can all agree on that! Magistra13 at yahoo dot com

They are so gorgeous, I would make a quilt from them. Nt a pillow, or a cushion! A quilt, or is it a throw, or a blanket????

I love your pillow! I have recently bought this pattern as there is a hedgehog lover in my house so this is very inspiring. In Canada a pillow is for your head and a cushion is for sitting on. We don't differentiate between a bed pillow or a sofa pillow.

Beautiful cushion! The quilting looks fab and they are so darn cute! Good luck with the stockings :)

Love your Hazels!! So cute :-). And I honestly called everything pillows until recently just because that's all I'd ever really heard. Cushions for us were the large ones in the couch that you sit on or are the back of the couch. So funny how they mean different things in different parts of the world!

Your "punk" Hazels are just gorgeous and such a great idea to use them in a longer cushion/pillow!

I like and I'm betting that it will put a smile on your face when you look at it.

very cute! I love how you matched the border to the hedge hog!

LOVE this! Such a cute hedgehog pattern. I really enjoy the quirky differences in some words within the global quilting community, and I hope people don't start homogenizing everything. "Pillows" in the U.S., "Cushions" in Australia and France - "Batting" in the U.S., "wadding" in Australia. It's all part of the charm of being connected around the world! I think somebody already mentioned, in the U.S. pillows for the sofa, etc., and for non-sleeping bed decor, are actually called Throw Pillows, but most people drop the "throw" part. They're not cushions to us at all, because those are things you actually sit on. I would never sit on your hedgehogs. ;D (But I would also enjoy you're calling it a cushion since I understand that is part of our linguistic differences)

In Germany cushion means "Kissen".
For pillow we specify "Kopfkissen" what means cushion for the head.
Happy christmas and a happy new year all over the world

I love the pillow, especially how the background matches up with the animal colors.

Weirdos with their language anomalies ;o) Your cushion looks fab!

These are adorable. I think of cushions as anything that I might sit on or up against. Pillows are more for heads to lay upon.