Somehow it's been nearly two months since I blogged?!? Admittedly I haven't been sewing at my normal frenetic levels (work, life, kids etc), but I do have a few recent finishes I'd like to share. As many of you would be aware, entries were due last Monday for the QuiltCon 2016 show. The week leading up to the deadline saw me finishing my Michael Miller fabric challenge entry and starting and finishing my EZ Quilting Triangle challenge - nothing like a deadline to kick me into gear ;o)

So this is my Michael Miller Glitz fabric challenge quilt. I really, really struggled to come up with an idea of what do to with these fabrics (bling on fabric is not my usual thing. At all.) I knew I wanted to include circles and to make it entirely black and white but beyond that I didn't have a clue. Eventually I came up with the idea of creating a stylised molecule against a simple strip pieced background. 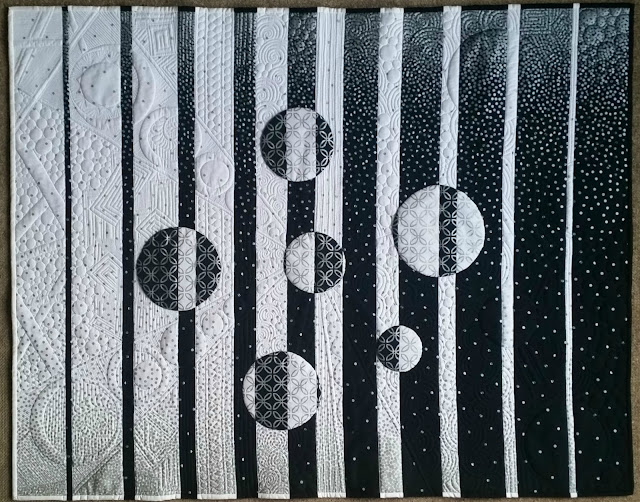 I have no idea if this is a modern quilt or not - but I had a LOT of fun making it. The design itself is quite simple, but I gave myself a ton of room to play with the quilting. In a way this quilt is a statement about the lack of complex FMQ I saw in the quilt show at QuiltCon this year. As much as I love the look of dense straight lines, I think modern quilting can be more than that - and I firmly believe that FMQ can be decidedly modern. So I've attempted that on this quilt. 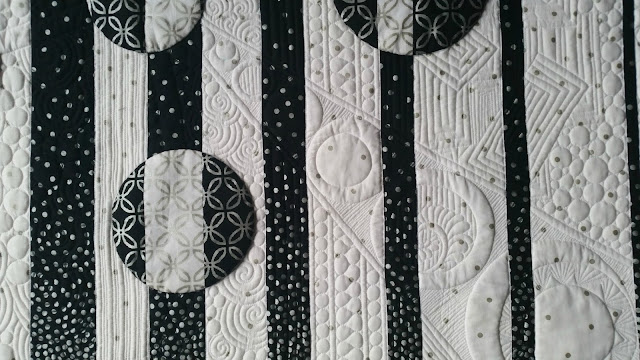 I even tried a bit of trapunto on this quilt - the circles have an extra layer of batting behind them, and have been needle turn appliqued onto the quilt top. You can see in the photo below, they are quite puffy, and make it just a little bit three dimensional. I decided to use blending thread for all the quilting - Aurifil 50wt in black and soft white - and I'm glad I did. Although there is a LOT of quilting on this quilt, because it blends I think it complements the quilt rather than dominating it, and gives it interest. 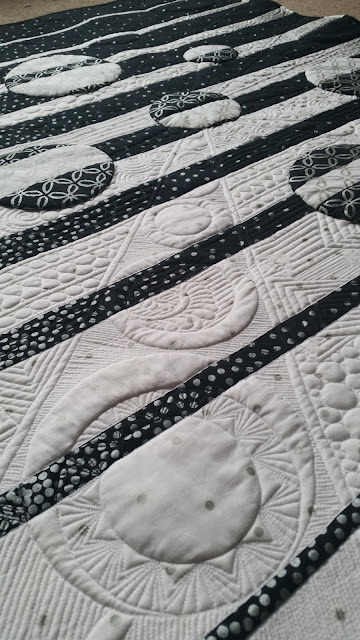 It is really difficult to capture in photographs, but the designs in the white are all continued through on the black sections. I used two layers of wool batting, so the texture is pretty awesome - plus these fabrics have a gorgeous feel. Very much like sewing with Cotton Couture. 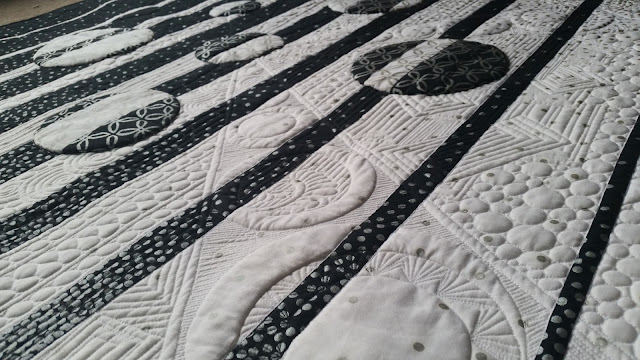 It's so nice to be back to blogging - I'm hoping to share some of my other recent work over the next week or two. I promise it won't be another two months between posts ;o)