Since finishing up the blocks for my Vintage Quilt Revival sampler earlier in the week, I have managed to put the quilt top together, make the back, and start the quilting (I think we can safely call this obsessed). If you follow me on Instagram, you will probably be aware of this from my blow by blow photo-spamming on Thursday. This is the first sampler quilt I've actually quilted (not the first one I've made, the first one has been sitting as a quilt top for *ahem* about eighteen months...) and it has been SO much fun to quilt. I didn't plan any of quilting on the blocks ahead of time, and pretty much made a spur of the moment decision when I got to each block. I'm a bit iffy about some of my decisions, but I think overall it works pretty well so far. 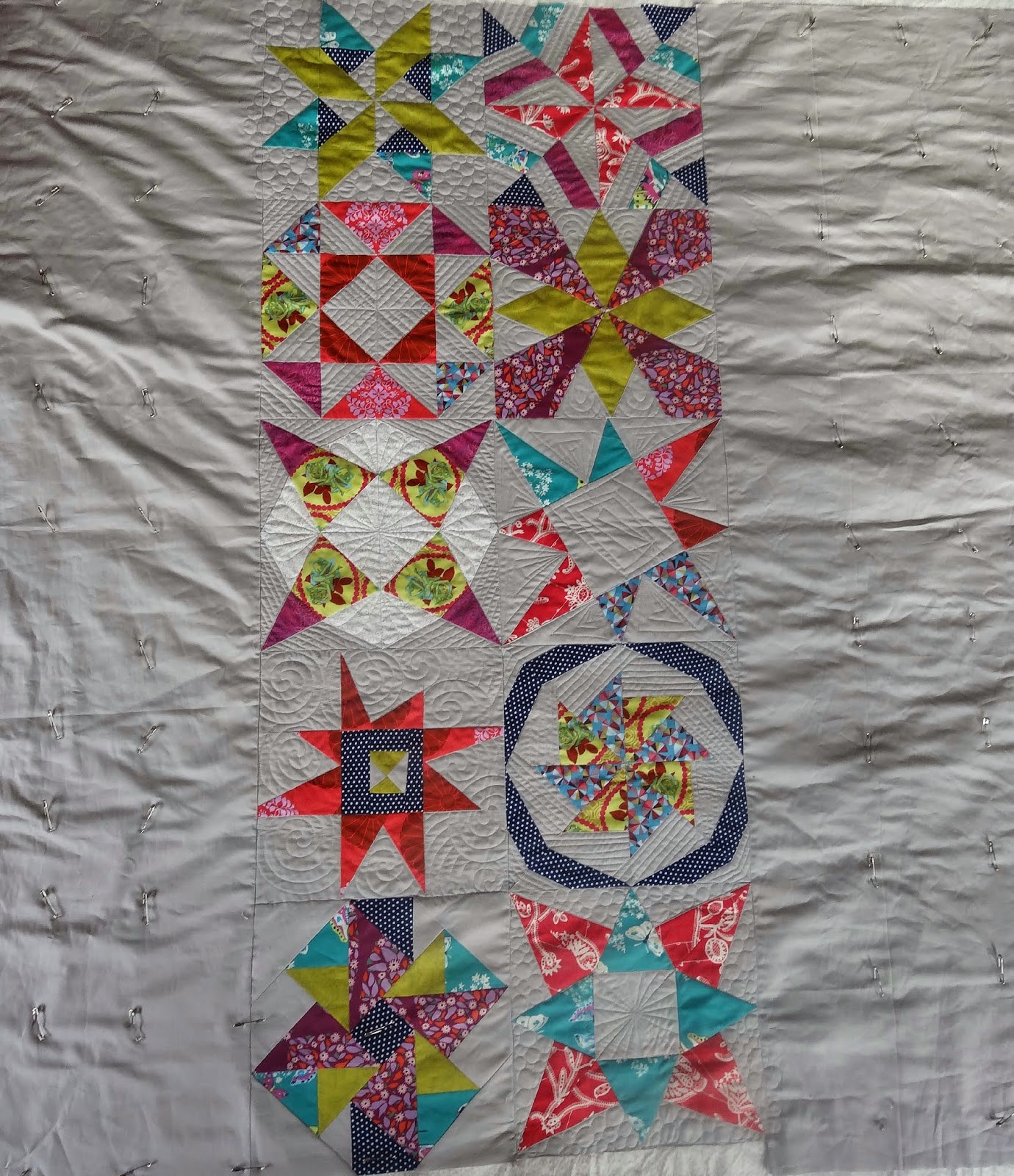 I've set the blocks two by five, with lots of negative space on each side (and the strip of blocks is offset from the centre). Because I've set the blocks right next to each other (without sashing), I wanted to use the quilting to highlight the individual blocks, and make it easier for the eye to separate them from each other. 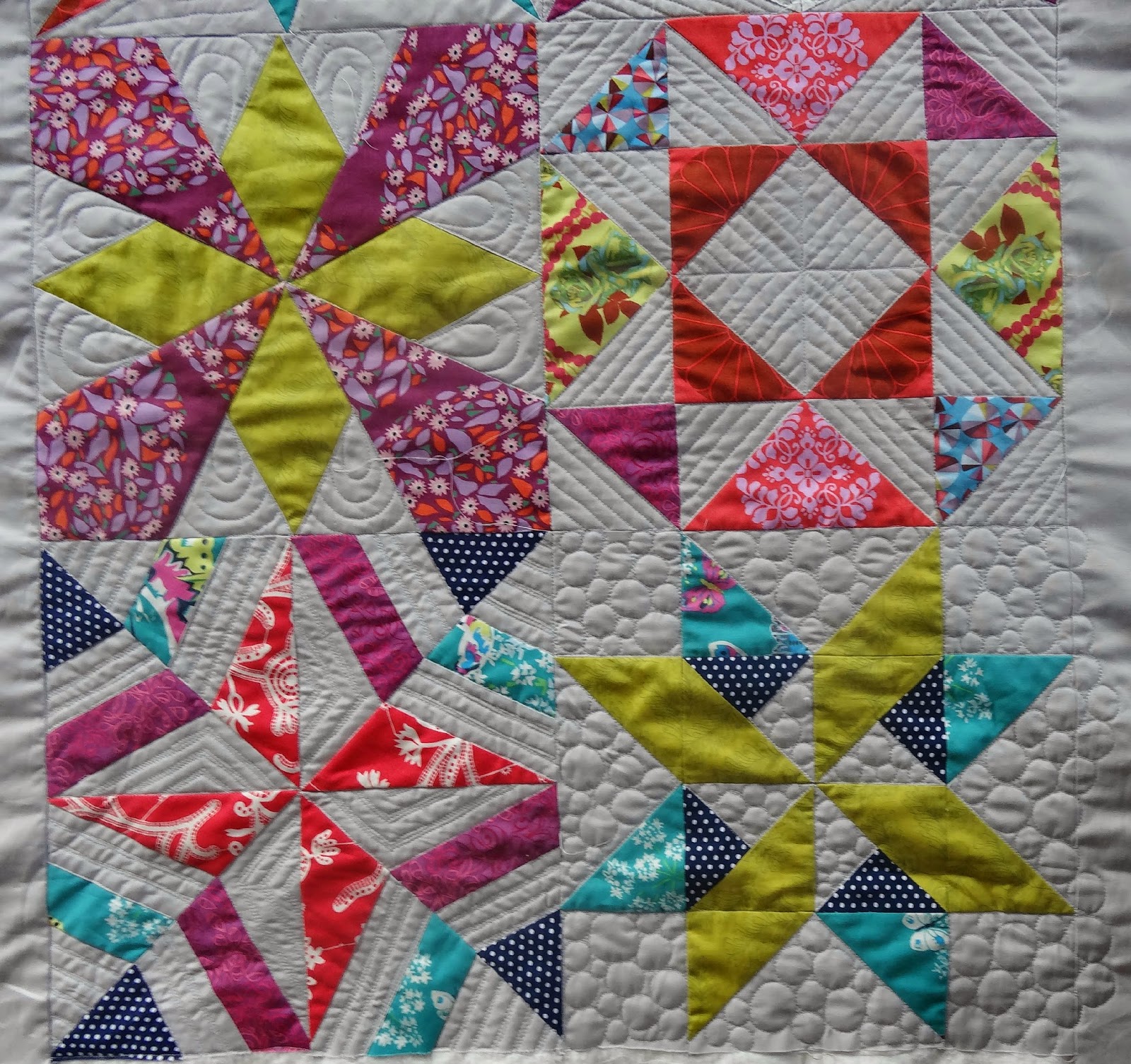 I've used the geometry in most of the blocks to decide how to quilt them. I've used straight lines following some of the seams in the block on a lot of occasions, and tried to accentuate the star in the block as much as possible. 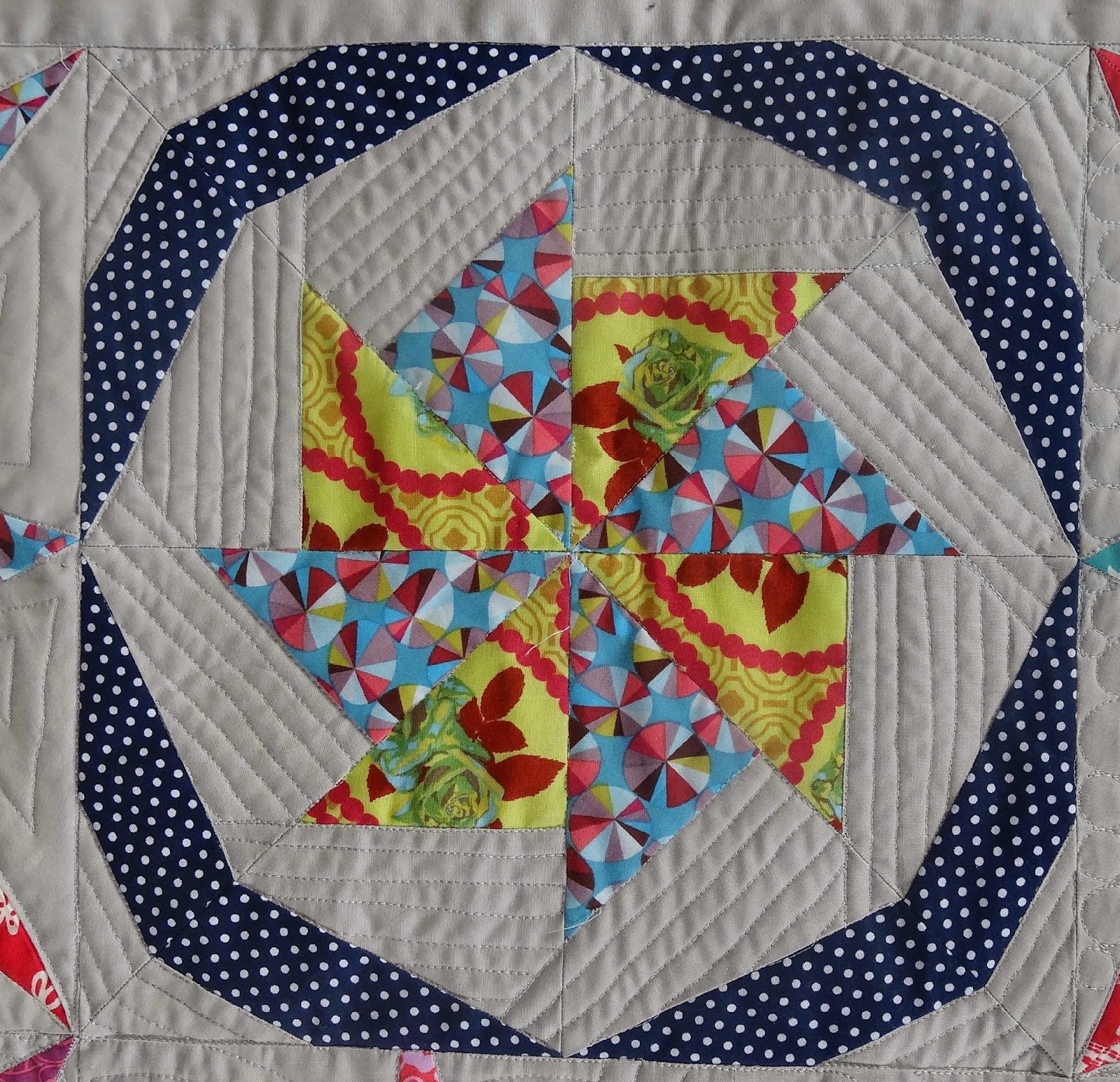 I really love this one. The block is called Riviera,  and I've used triple stitch (like I did in my Retro Flowers quilt). I'd forgotten how awesome the texture is - and I think it adds a great dimension to this block. 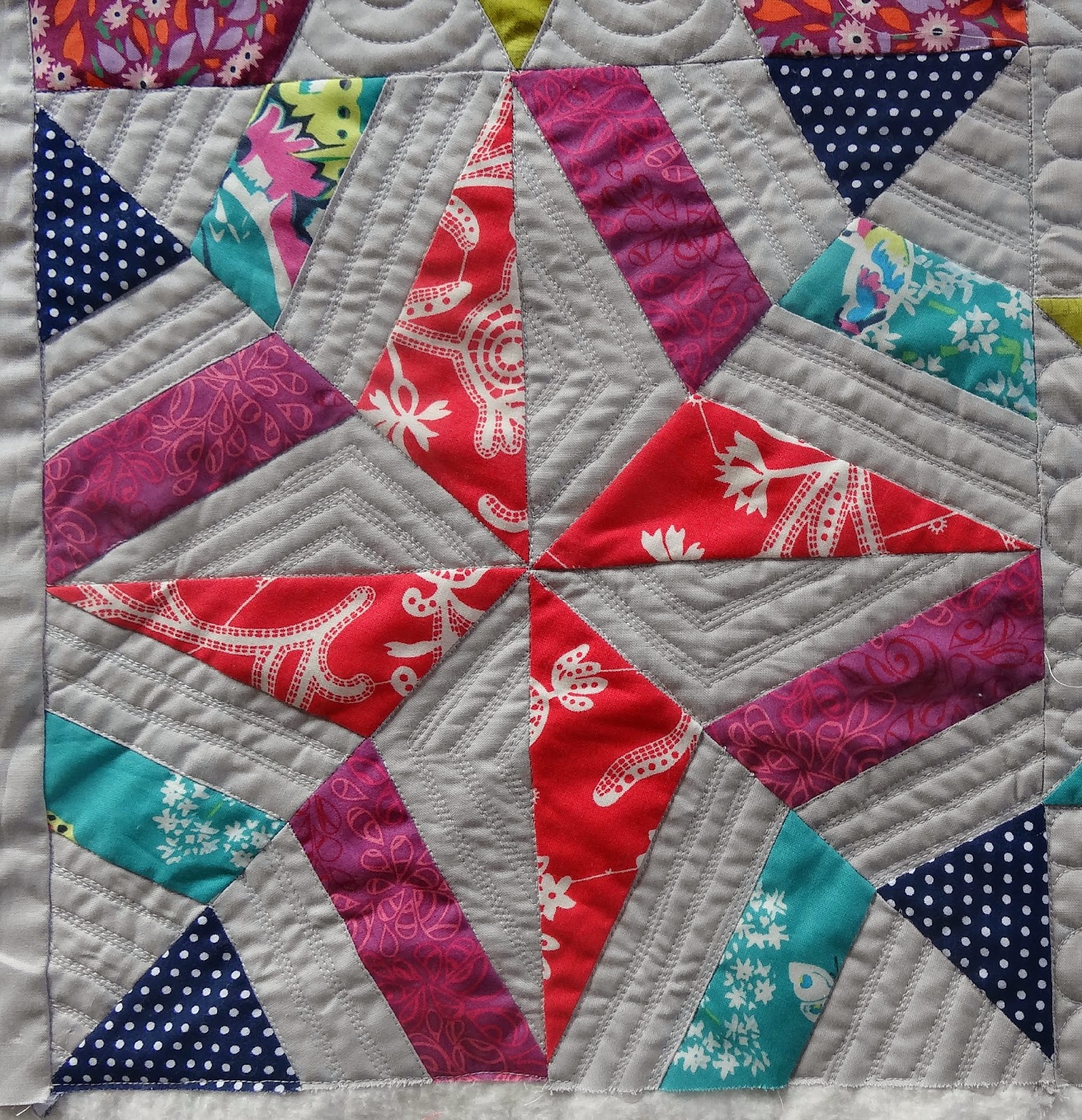 This one I'm a bit uncertain about. I like the outer triangles, but I'm not so sure about the centre. I'd love some your honest thoughts on that bit :o) 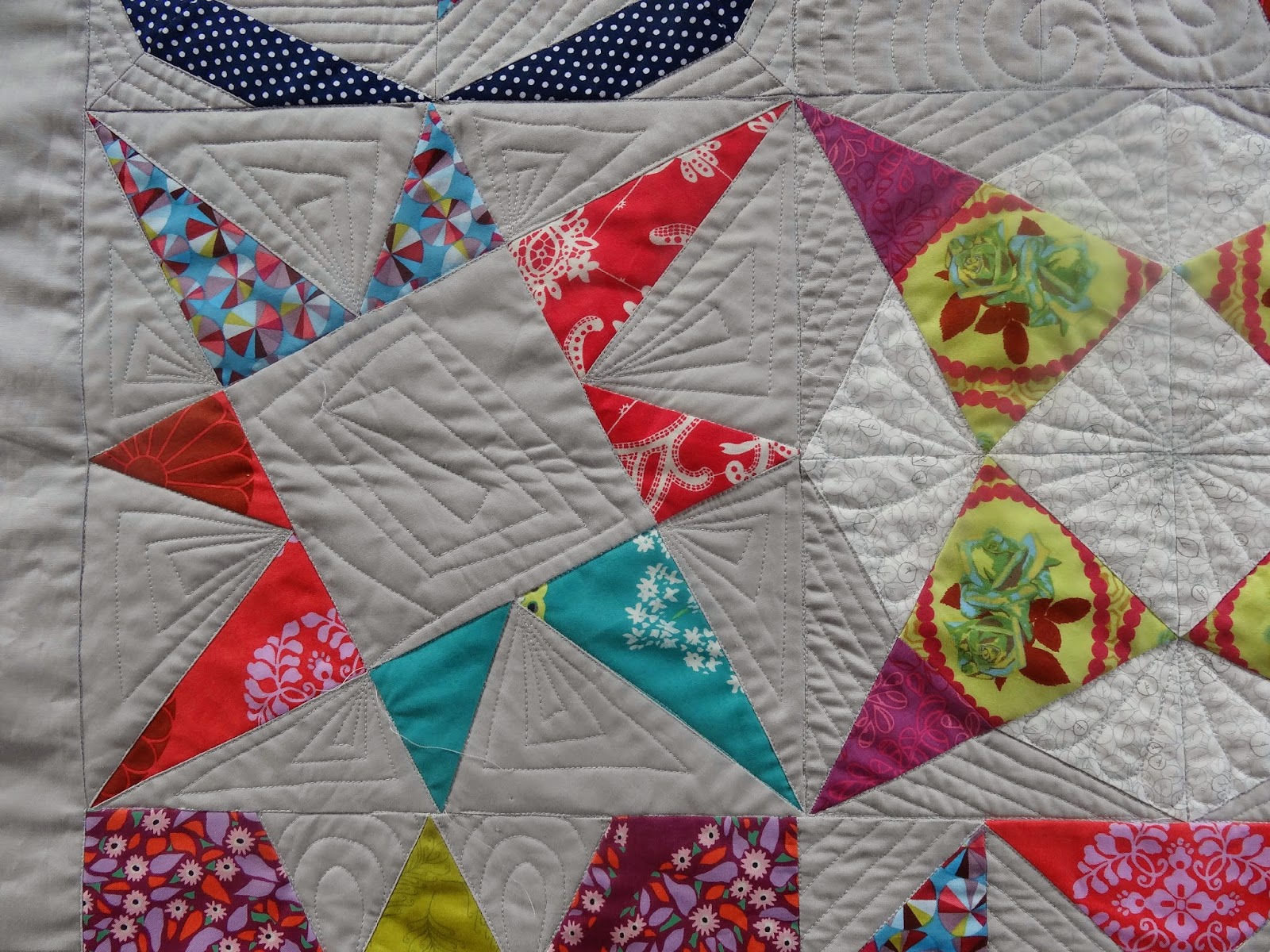 I have used a few curvy motifs as well - like the spirals sitting 'behind' the improv star, and pebbles on a few blocks. It is mostly straight line quilting in the blocks, but I figure I'll be doing a lot more curvy stuff in the negative space so it will hopefully balance it out a bit. 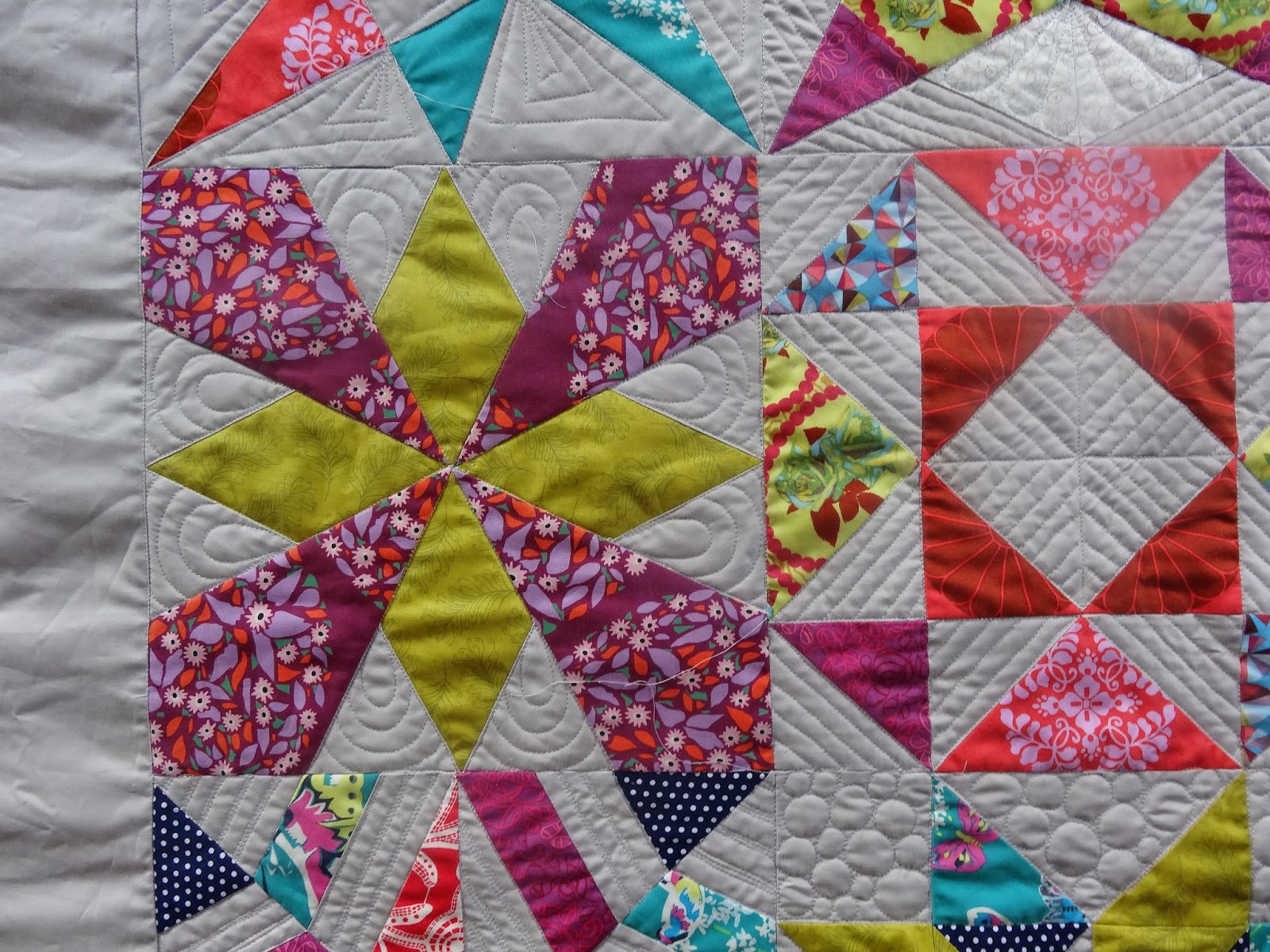 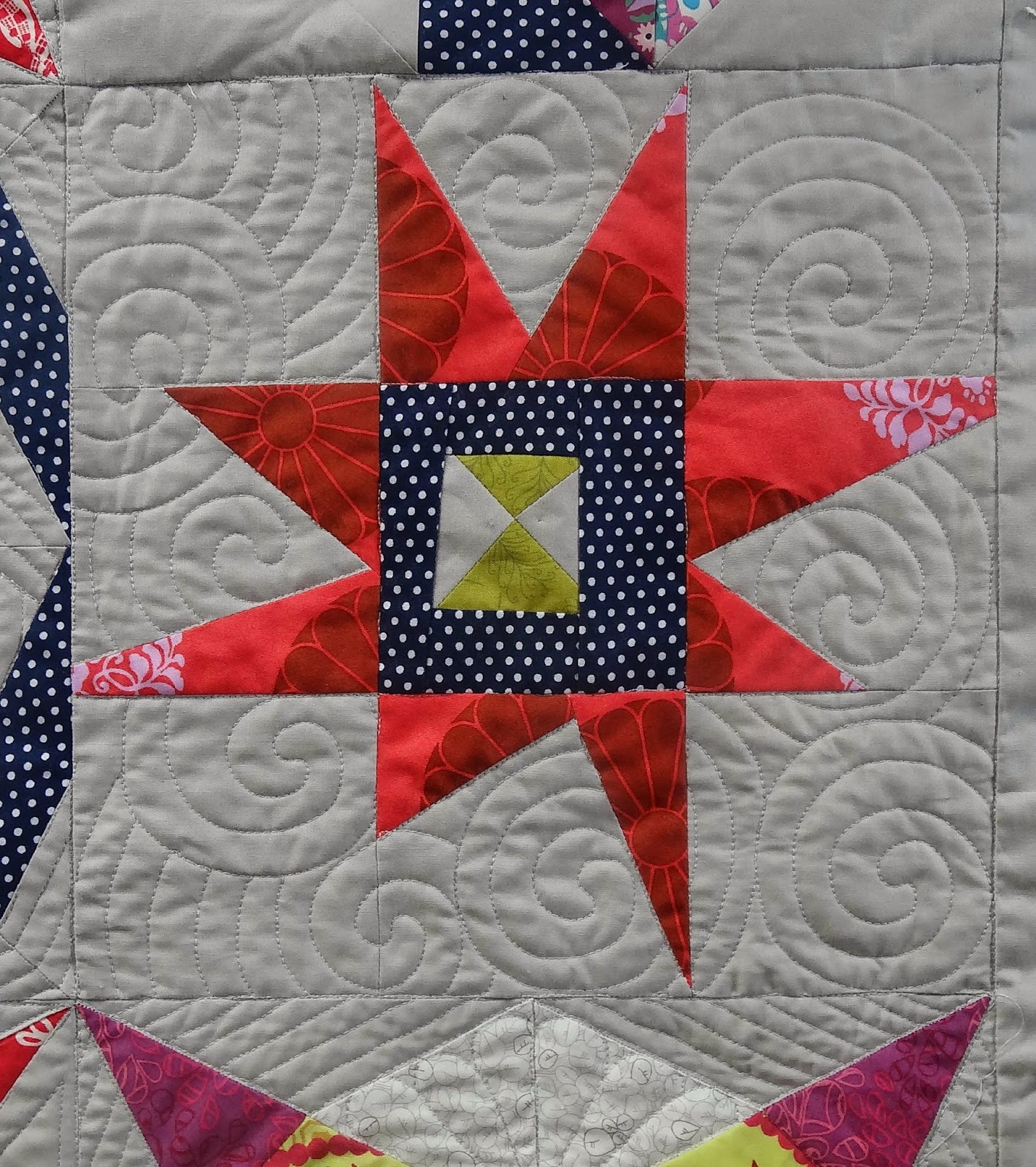 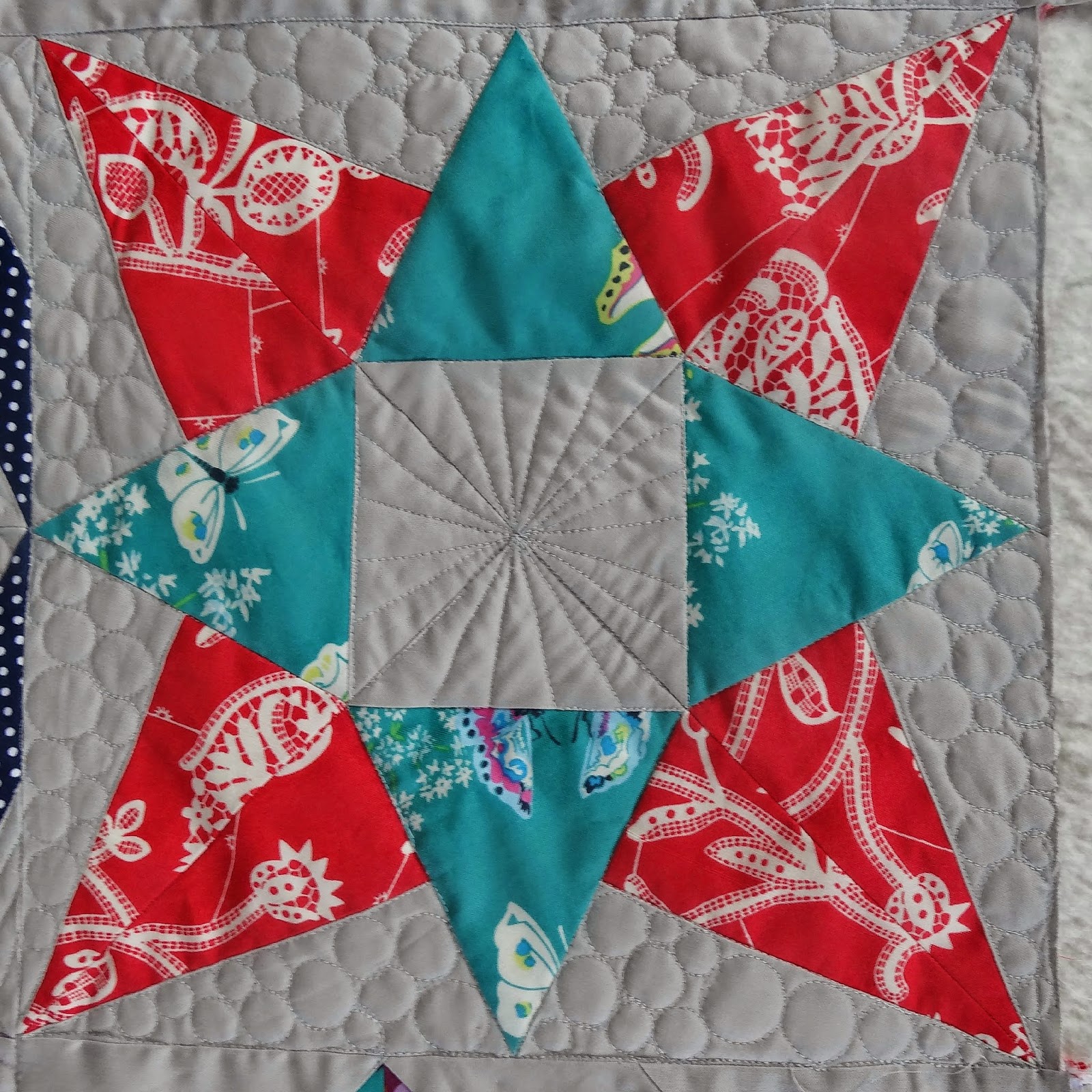 I am particularly excited about the amount of negative space I have to play with - and quite intimidated at the same time. I've never quilted something with such a broad expanse of open space before - I have a general idea of what I'd like to do, but a lot of that involves winging it and hopefully making it work...

So I think my Saturday night will be spent quilt wrangling. I truly am that exciting ;o)

The Fat Quarter Shop giveaway is still open (until tomorrow night) and my Giant Chevron pattern is on sale until the QAL kicks off in July.

Have a great weekend!
xx Jess

Hi Jess looks great I wouldn't worry about the wonky centre on that one because as you said the different quilting sets each block off. What really caught my eye was the 3rd block on my left the one with the different coloured back ground, that just drew me in. Nice job look forward to seeing the final product.

Your quilting looks so great! I think that alternating straight line quilting with the curved quilting helps the blocks stand out from each other.

So amazing! It looks fabulous. Honestly I'm not in love with that middle bit as much as the rest but it doesn't stand out when you see them all together. Can't wait to see this done :)

The middle doesn't stand out too much, but I think I'd like it more like a Greek key motif, kind of like a squared spiral. Does that make sense? That said, my FMQ is rubbish, so I stand in awe regardless!

This is SUCH a great idea! thanks

I love your quilting! It's just as exciting as the blocks!! I think your own intuition is telling you that you don't like the center of that block.

These blocks are beautiful and I love the quilting! Can't wait to see how you quilt all the negative space!

love the blocks and your quilting is so diverse…great look

So much negative space would freak me out... But I know you'll make it look fantastic. Happy quilting :)

Looking good, can't wait to see what you do in the negative space :o)

Looking forward to the next bit - in a similar situation and it is freaking me out for now!

Grrr, once again, signed in with my hubby's account (deleted comment above), SORRY! What I said was, inspiring quilting as usual! Lovely work Jess. :)