And since I've been madly trying to get my blocks done for the HFWYG? QAL I actually have been 'building blocks'. I only have a few of the 5" blocks left to do - but there's a bit of a drama. I took my sewing machine in to be serviced yesterday and I've borrowed my old machine from my sister. Total first world problem here - but I HATE it. I never used it for complicated patchwork (ie just squares back when I started quilting) and I quickly discovered the 'patchwork foot' I'd been using actually sews a 3/8" seam - and the foot is designed so that I can't shift my needle position to fix it. Soooo, instead of ripping pretty much every seam three or four times I'm leaving the rest of my blocks until I have my machine back :o)

I persevered yesterday and made these: 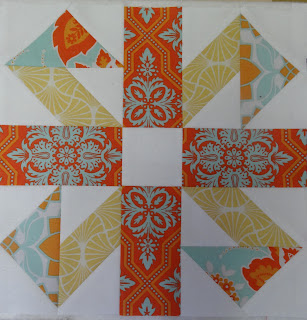 Jack in the Box 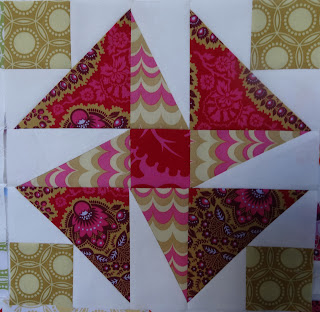 All the blocks together (a couple of small holes where the remaining blocks will go). Apologies for the horrible photo - my design wall is not well lit ;o) 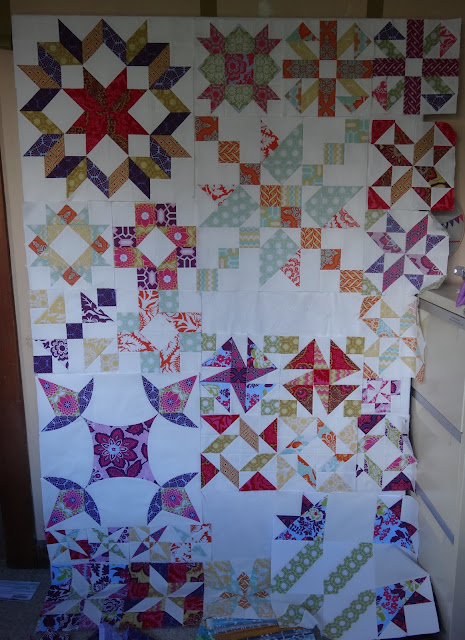 I'll admit I have been wondering if it would just look like a big mess (and it kind of still does) - but I actually really like it. I'll probably swap a few blocks around to try and balance it a bit but the layout is pretty much there.

Email ThisBlogThis!Share to TwitterShare to FacebookShare to Pinterest
Labels: blocks, Building BLocks Tuesday, How Far Will You Go? QAL

These look marvelous, Jess! Even with the drama, they look great!

Bugger on the old machine! Mine really needs to go in for a service, but it'll have to wait til after Christmas!

I'm a little concerned that mine is going to look like a mess when I get it put together. I need to put together the last 3 sets of blocks then I'll be ready. Hope mine comes out as good as yours.

Looking good! My machine needs a service too but I have too much to do! Hubby got my overlocker going today, it was siezed up from lack of use!

I really like those blocks together, I don't think they're messy at all. I'm not one for perfect symmetry, saying that :) I've had old machine drama while my newer and stupidly expensive (and temperamental) machine was serviced under warranty. Once I was used to it again I've actually found old machine love!

oh my gosh it looks brilliant!!! Just the inspiration I needed to catch up a bit more!

Wow, I've been looking forward to seeing them together, they look fab! I have a UFO that I started on one machine that I've since passed on, I'm dreading having to work out where to stich when I pick it up again!

Love this Jess! I am actually thinking something similar might be done for the Scrappy Bee... Hmmm... Food for thought ;)

Hope your machine gets better soon!