Down Under Doll Quilt Swap

I have been uncharacteristically quiet on the blog lately - mostly because I've been working on a 80" square quilt for a magazine, so haven't been able to share my progress (although I have been sharing a fair few peeks over on Instagram). It's completely finished as of last night though, so I'll be back here waffling about my quilty projects again until the next one ;o)

A couple of months ago, I signed up for the Down Under Doll Quilt Swap - a mini quilt swap for those of us based in Australia and New Zealand. I have been working on this in little spurts over the last month or so, but the last day to send is the first of December, so I pulled my finger out and finished it up today.

This is an idea I've wanted to try for a while, so it was a lot of fun to put together. I was a bit concerned about how well my points would match up as I didn't starch my fabric before cutting all the triangles, but I'm pleasantly surprised. A couple are a wee bit off, but mostly it came out really well. 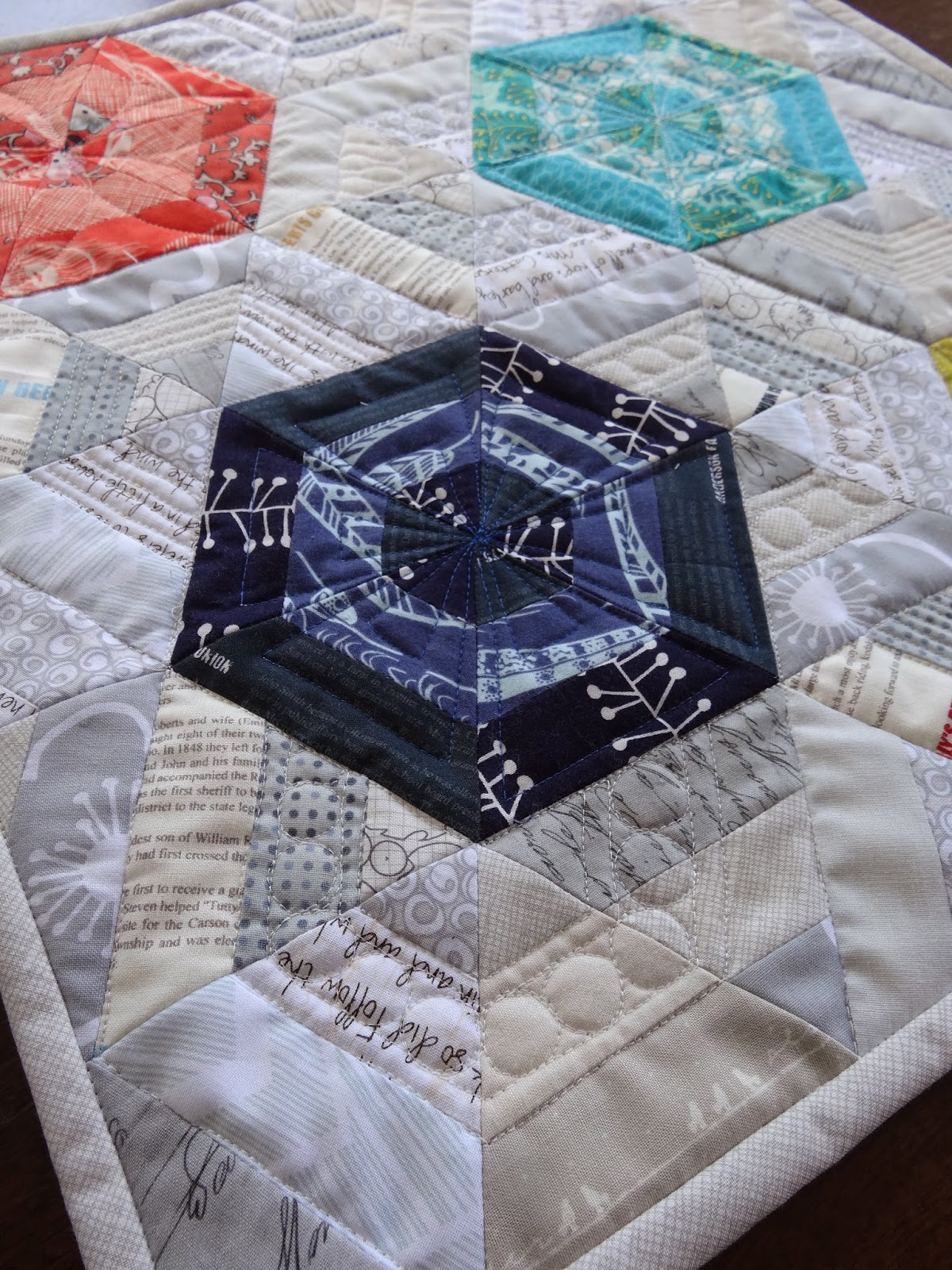 After working for so long on a large quilt, it has been a really nice change to work on something small (my arms are especially grateful!) This little quilt is about 18" square. 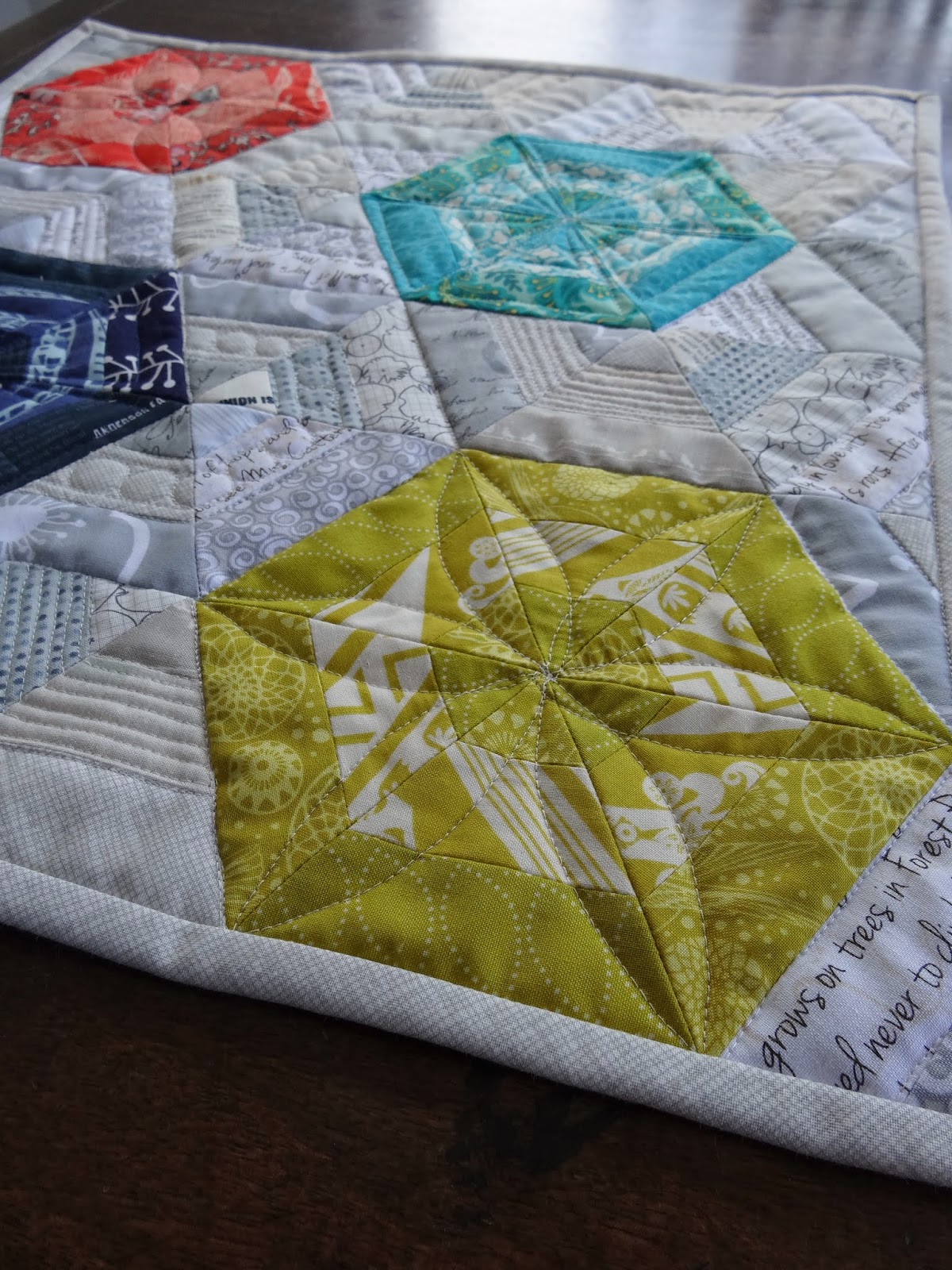 I kept the quilting fairly simple, since there are so many seams in the quilt top (each of those strips in the triangles are 1" finished). Even so, I really like the texture the minimal FMQ has added. It has helped highlight the subtle pattern created by the light grey partial hexagons - although I did mess up some of the piecing at the bottom. Hopefully it's not too noticable! 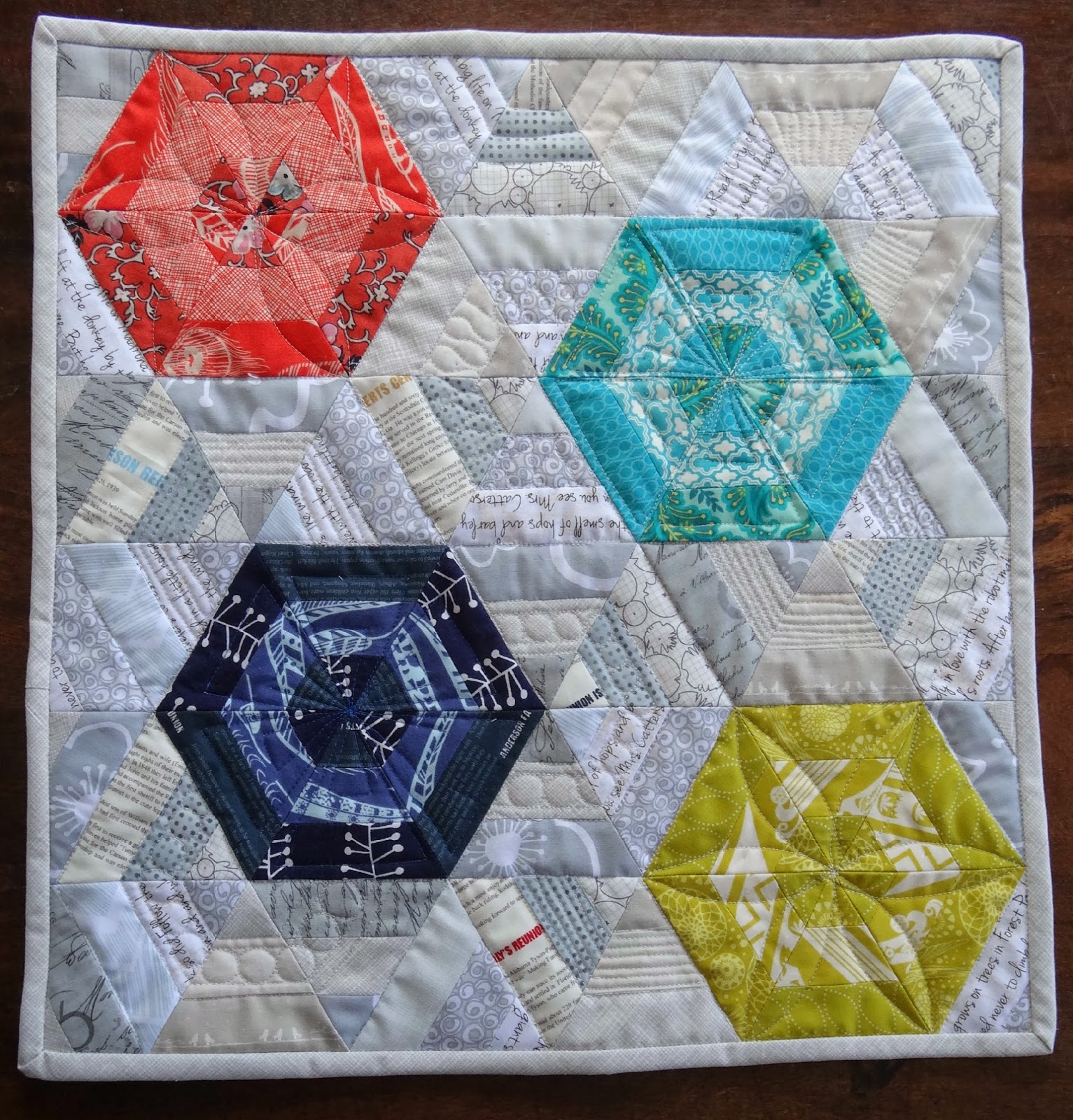 I'll be posting this one tomorrow, so hopefully my partner likes it. I have actually started another version of this on a larger scale and will be taking photos and write up a tutorial for how I put it together, so stay tuned for that in the next few weeks :o)

Gorgeous! I look forward to receiving it. Funny as I don't remember signing up... but ok. :)

I'm sure your partner will love this Jess! I look forward to seeing the mini you receive too!

love it!! and i know what you mean about publication work....it's been making me boooo lately....

Its gorgeous Jess! and I think the quilting is perfect! love it :)

I would love to see that in my letter box! But I have already received mine lol

It is beautiful Jess I am sure your swap partner will love it!

What a stunning little quilt! Love the colors and the low volume background!

Can't wait to see the secret you've been working on! =)

I have been watching this grow on IG and I marveled at how fast you finished the quilting! Now I realize it is a mini, but it is still amazing to me that you did this amazing work so quickly. What a beautiful mini!

What a gorgeous piece!!

Very nice missus! Oh, and remind me to tell you about a nice, but funny comment I read about you on another blog recently...

Oooh I love this one! Definitely looking forward to a tutorial (and making a smaller quilt!).

This is a really beautiful quilt! Quite jealous of your partner.... ;-)

I love this! Looking forward to your tutorial!

Absolutely fabulous! Love the colors and of course the quilting...yum!

This is a beautiful mini quilt Jess - love your design and the LV background!

Really lovely Jess. I love the colours and really rich looking with the triangles mixes like this.

Love it! I might have to make one of my own.

This is really beautiful :)