Before we left for Melbourne last week, my boys were given a small Android tablet each from their grandparents to use during the plane trip. As soon as they were given them I started planning to make cases for them (naturally!). I actually started these pouches for them before we left, but didn't get them finished until today - better late than never I guess! And they do really like them, which is great.

I used the great iPad case tutorial from Fresh Lemons Quilts, but scaled it down to fit the smaller tablet size. They are a wee bit snug - I forgot to allow for the extra thickness of these tablets compared to an iPad - but they can squeeze them on. I'm not sure how useful the outer pocket is going to be though ;o) Both cases are made using Lizzy House fabric - the blue/teal is from 1001 Peeps (still one of my all time favorite collections, and the first time I've cut into my stash of these) and the green is Castle Peeps. 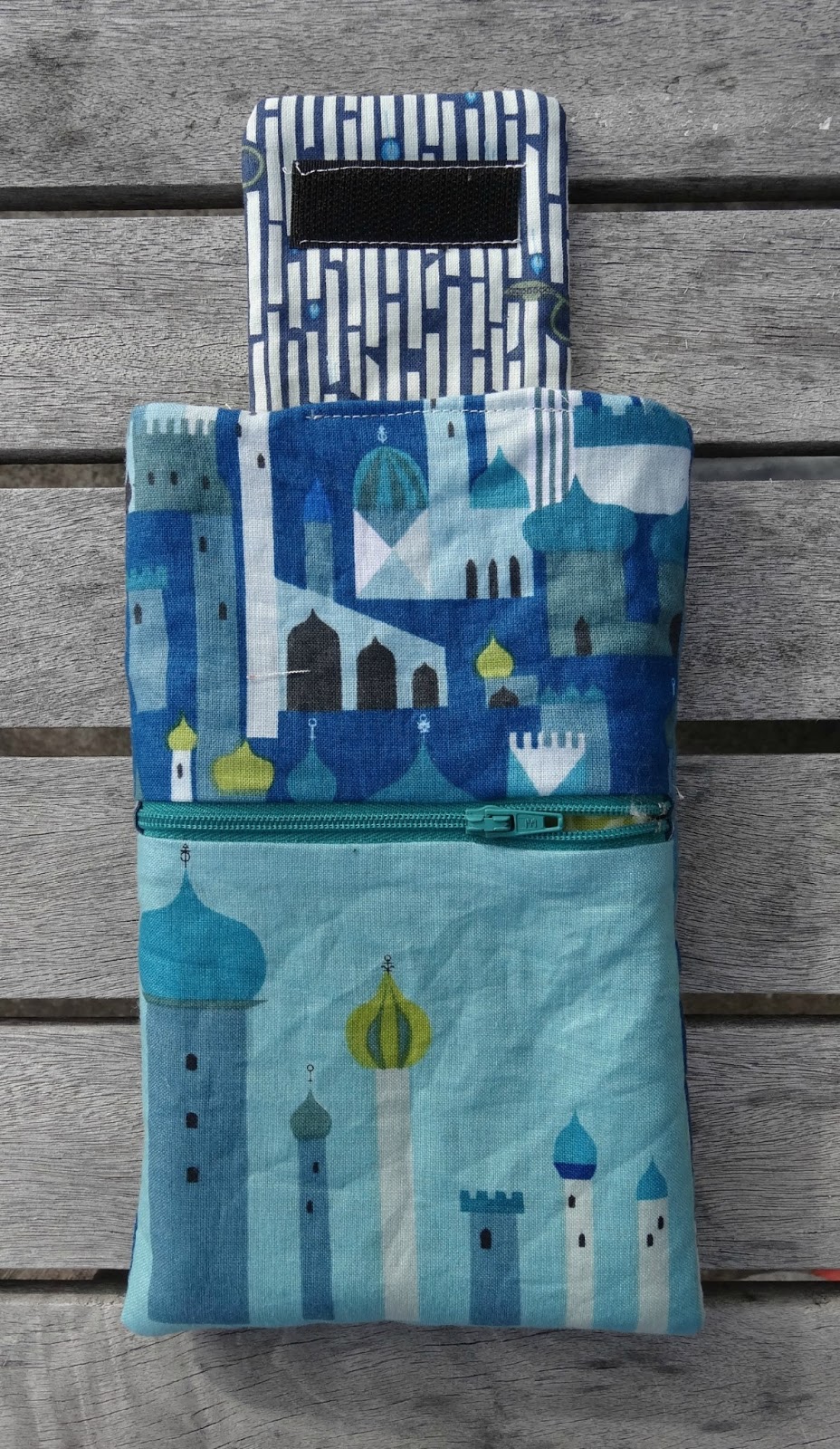 The reason they are open as shown is that I can't fit them over the end of my sewing machine to sew the bottom piece of velcro on - so I'll be hand sewing it on at some stage. I'm not sure where my brain was to be honest - hopefully my hand stitching will be enough to hold it there... 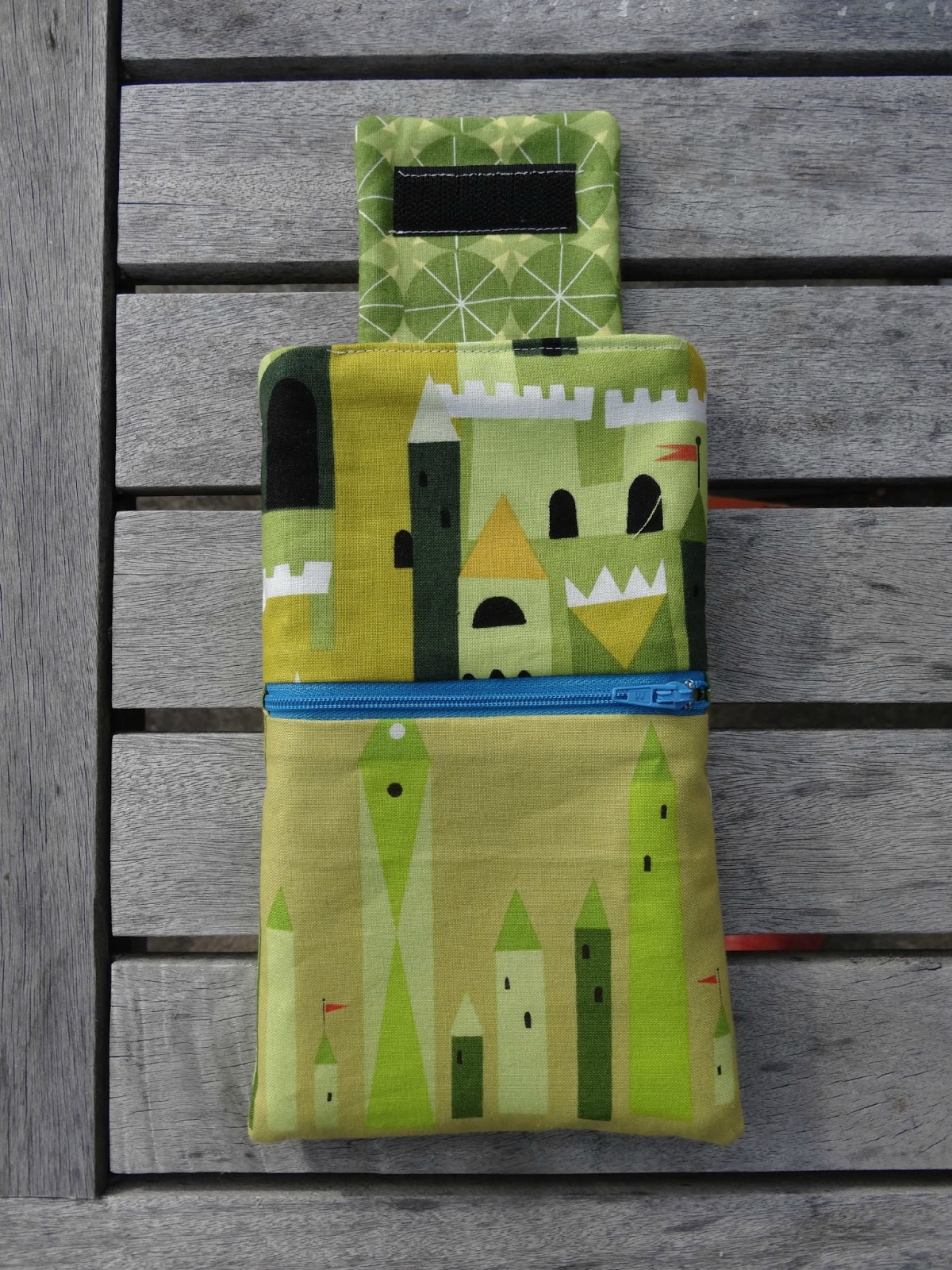 While I was at it, I finally made a cover for my iPad as well. I used an Echino cheater patchwork print, and quilted along the lines between the squares. 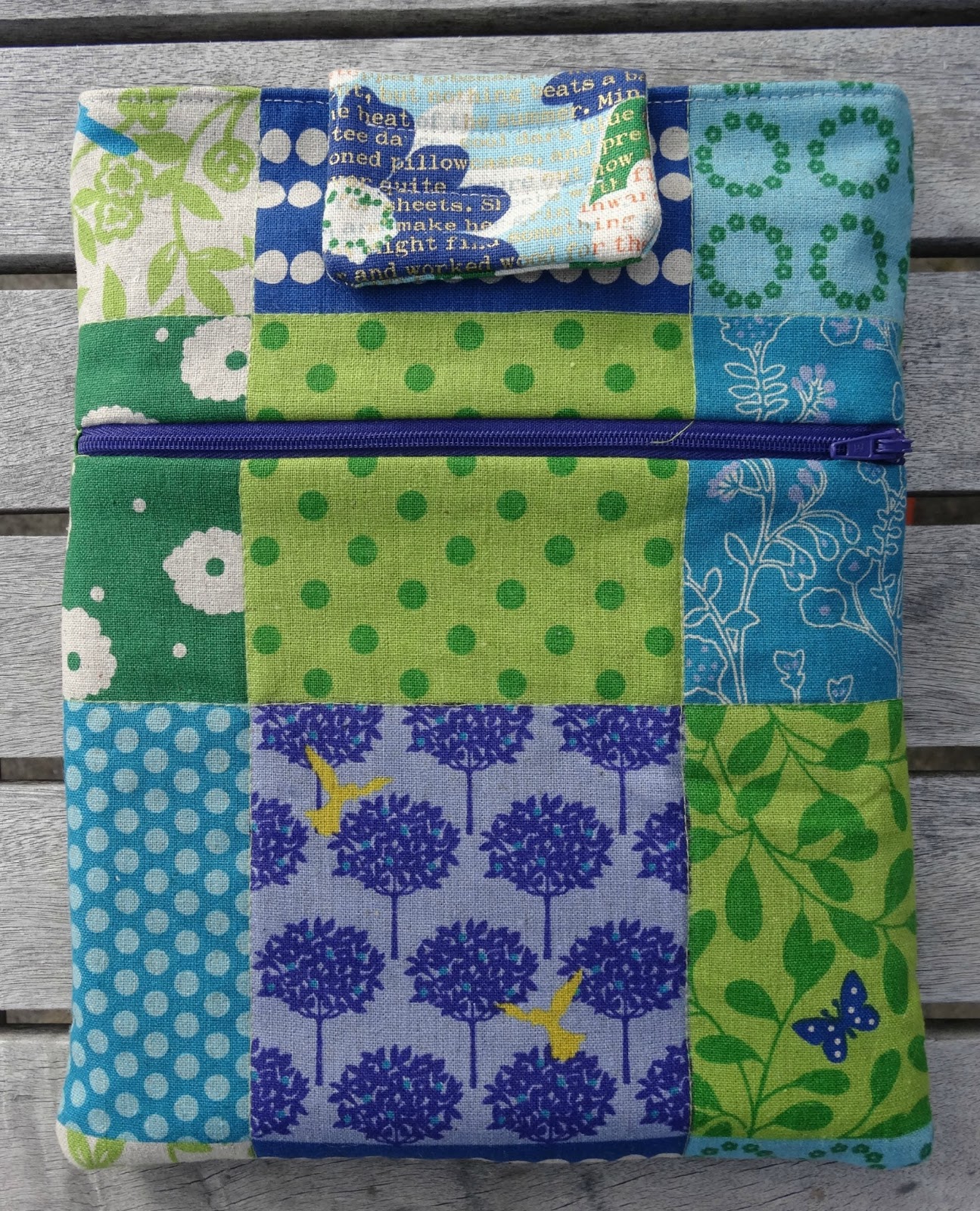 We have a bit of excitement going on in our house at the moment as well. We bought our house a bit over two years ago, but haven't done any renovating until now.  I didn't take any really good 'before' photos unfortunately - but the dining part of our kitchen used to be really fugly exposed brick - it's now covered with plasterboard :o) 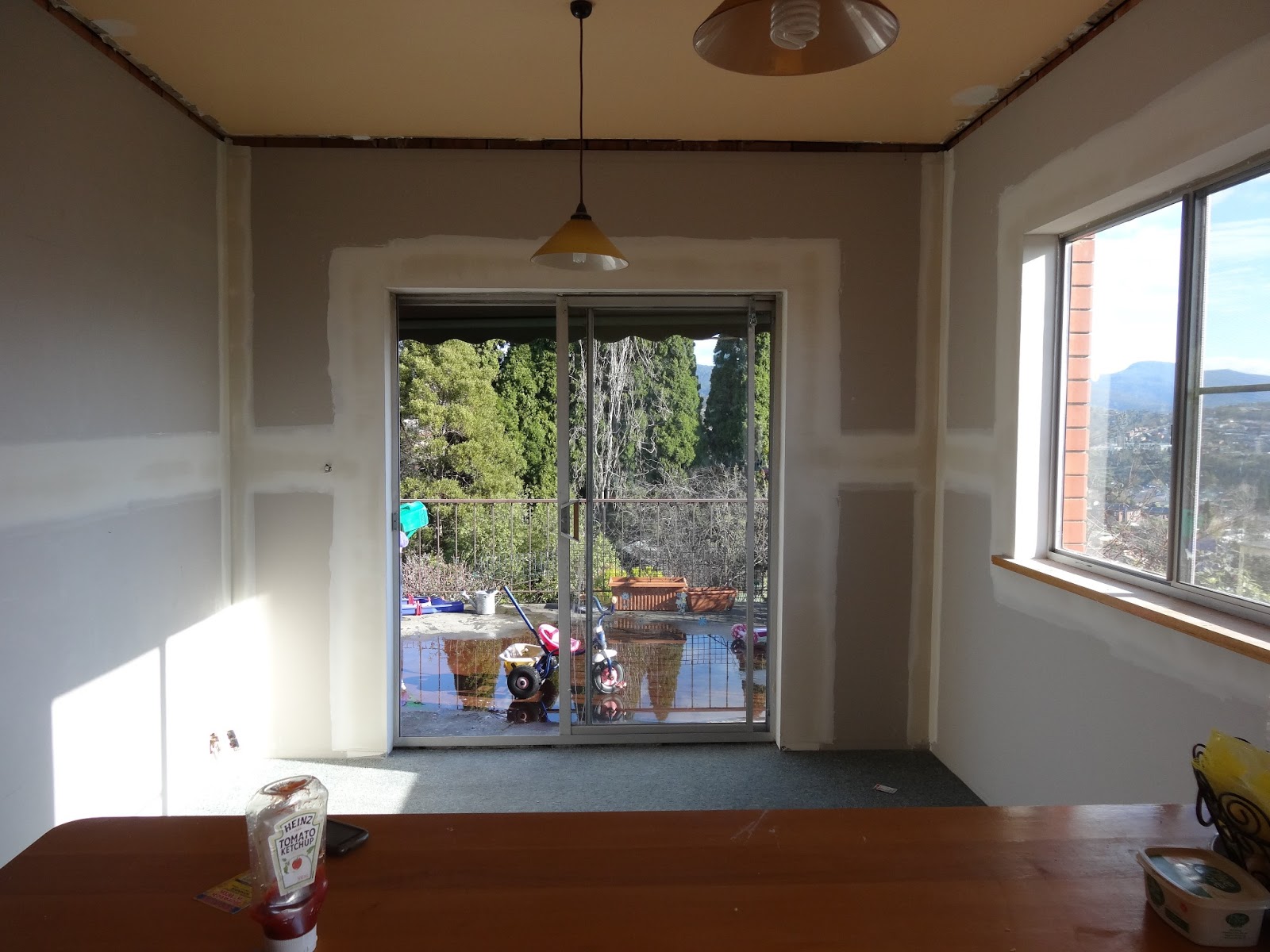 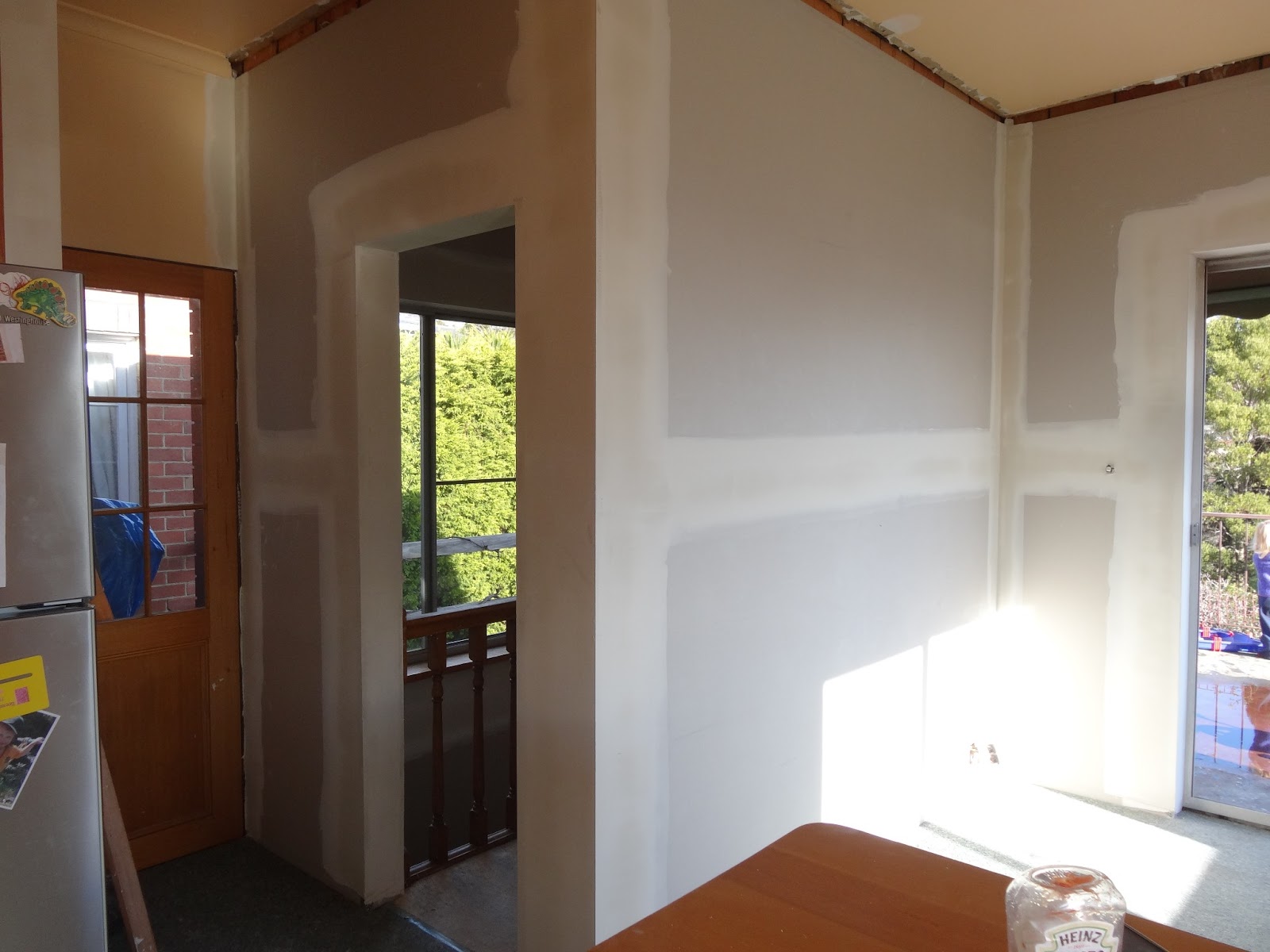 We are just waiting for the plasterers to come back and sand it back in a few days and then I'll be painting - which I'm SO excited about. I love painting walls :o) 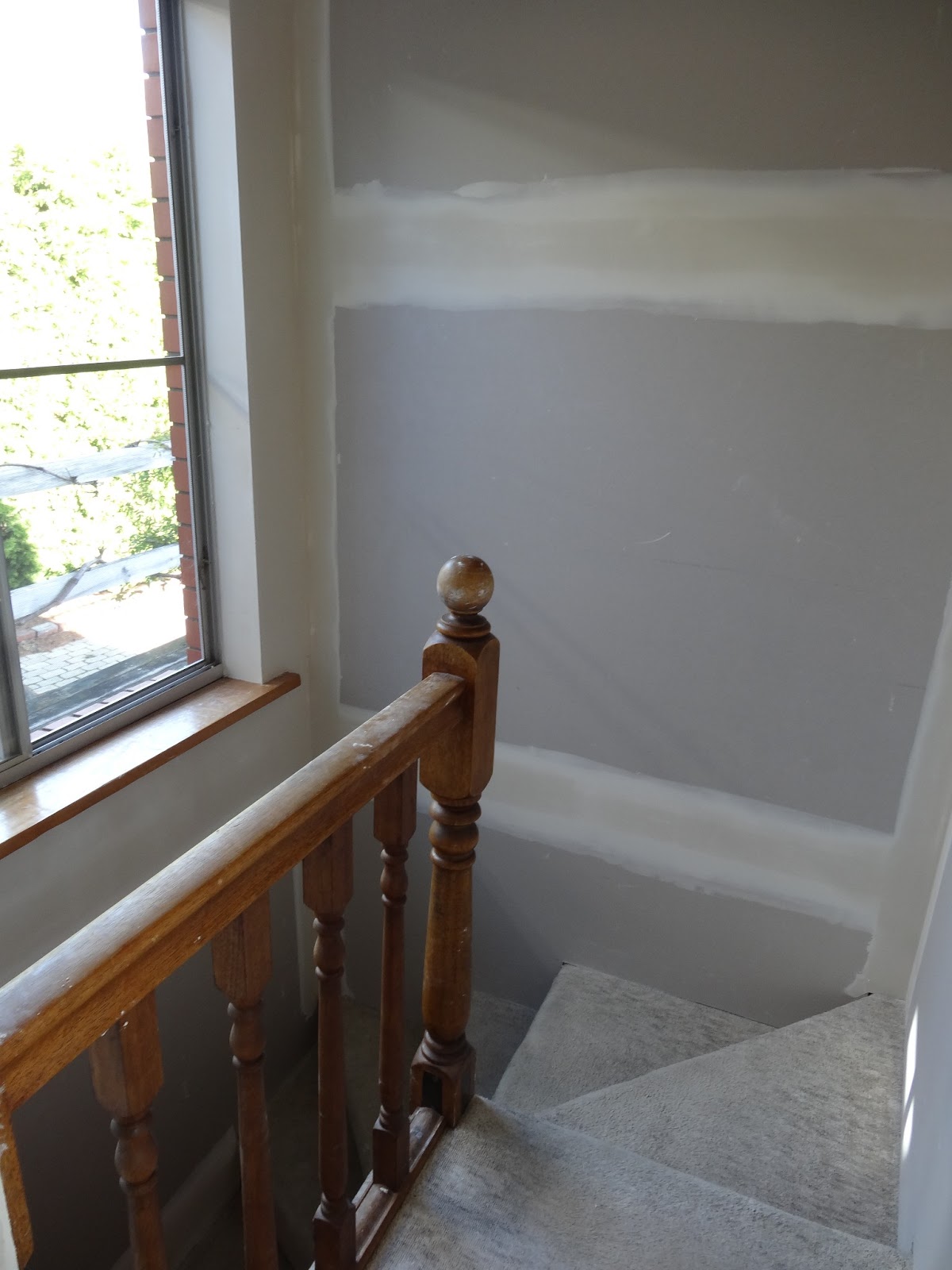 Downstairs in our house we have a large rumpus room - which will eventually be my studio once we don't have kids living at home anymore. So yeah, probably in a decade or so ;o) It has really poor natural lighting - there are only windows at one end of a very large room. And until recently it was completely covered with dark wood panelling, which made it really dark and gloomy. 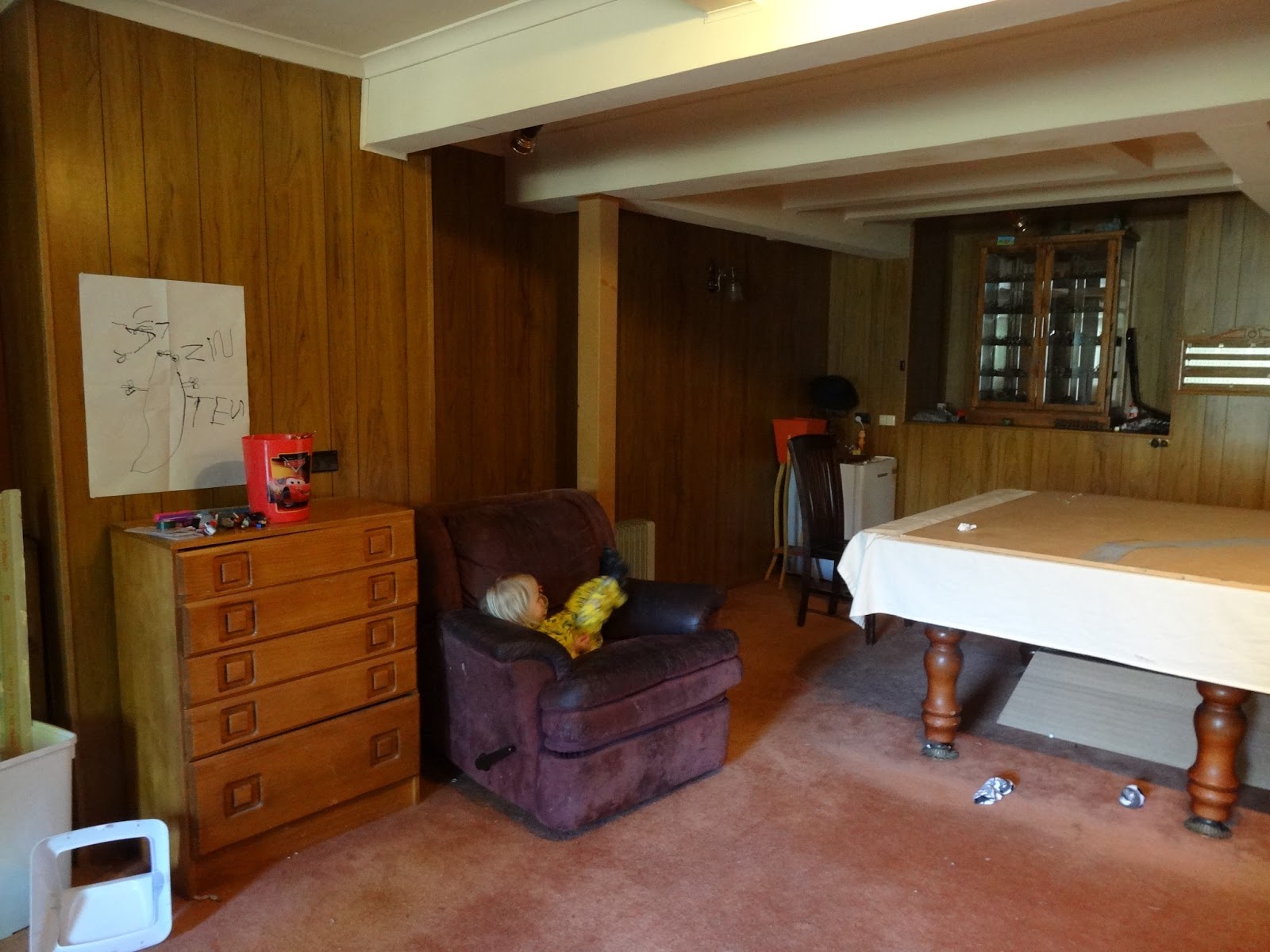 I'm beyond thrilled that this now has plaster walls as well - even the bare plaster board makes the whole space SO much lighter. This is the same area as the above photo (with everything shoved into the centre of the room). 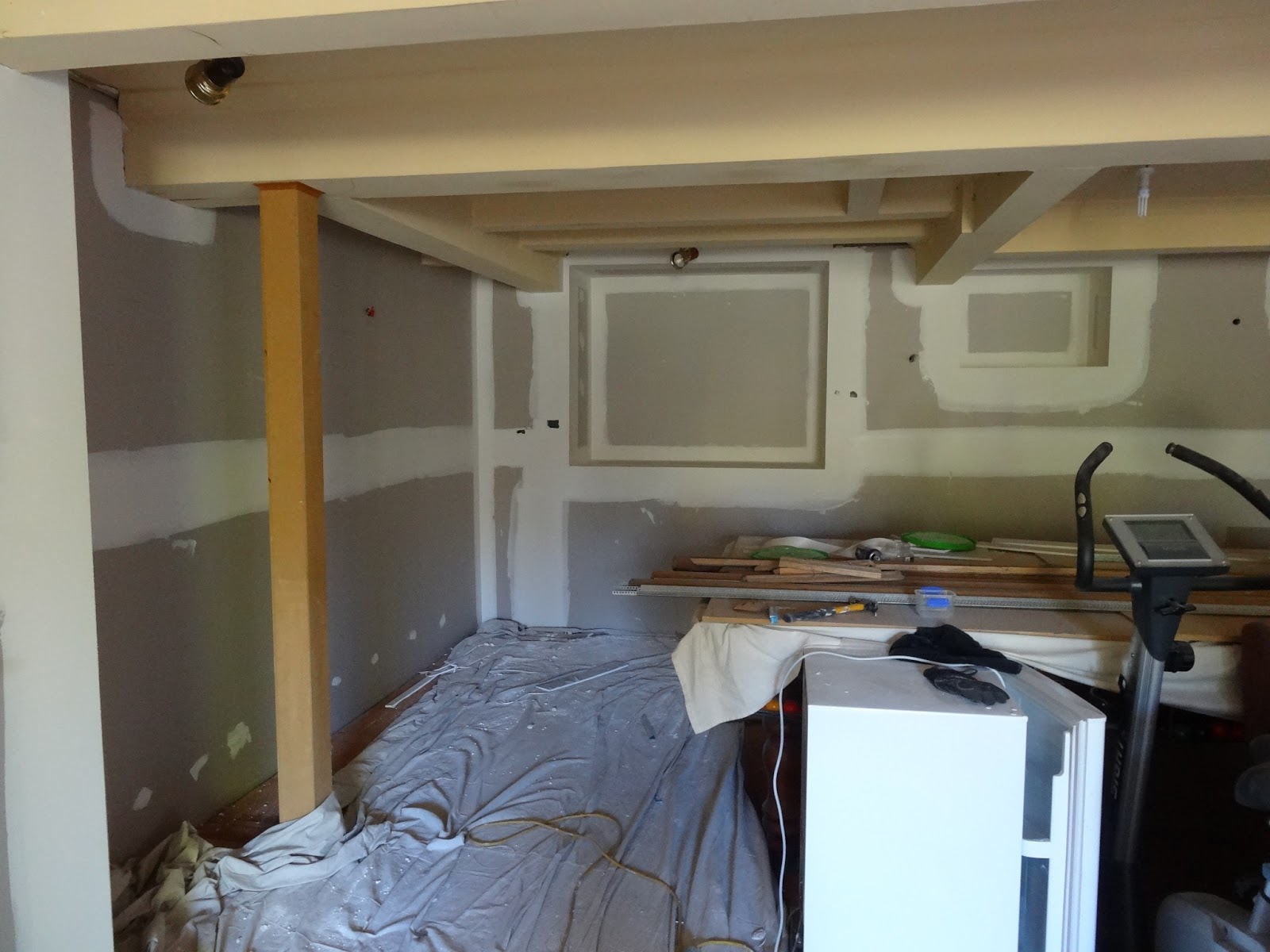 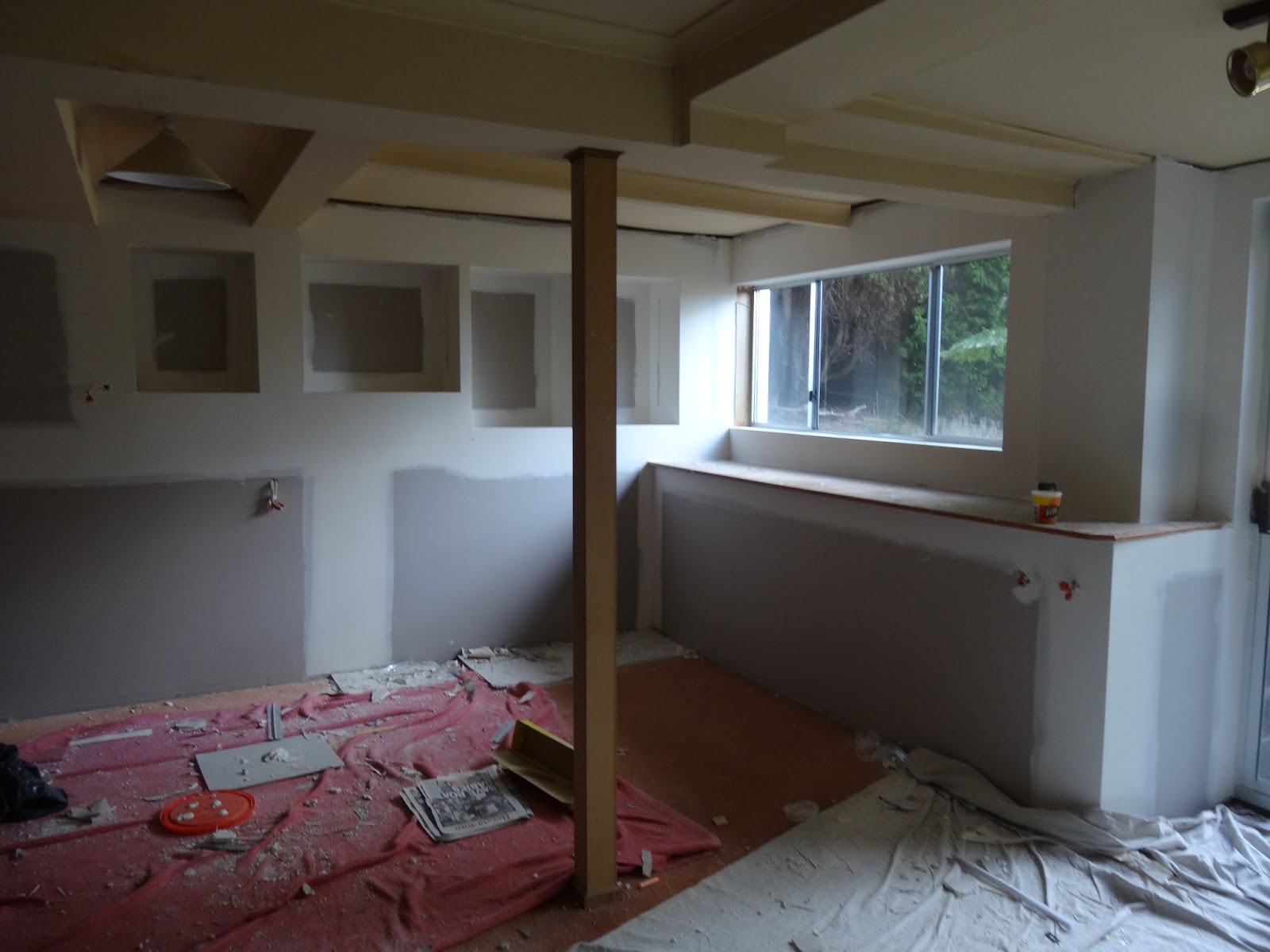 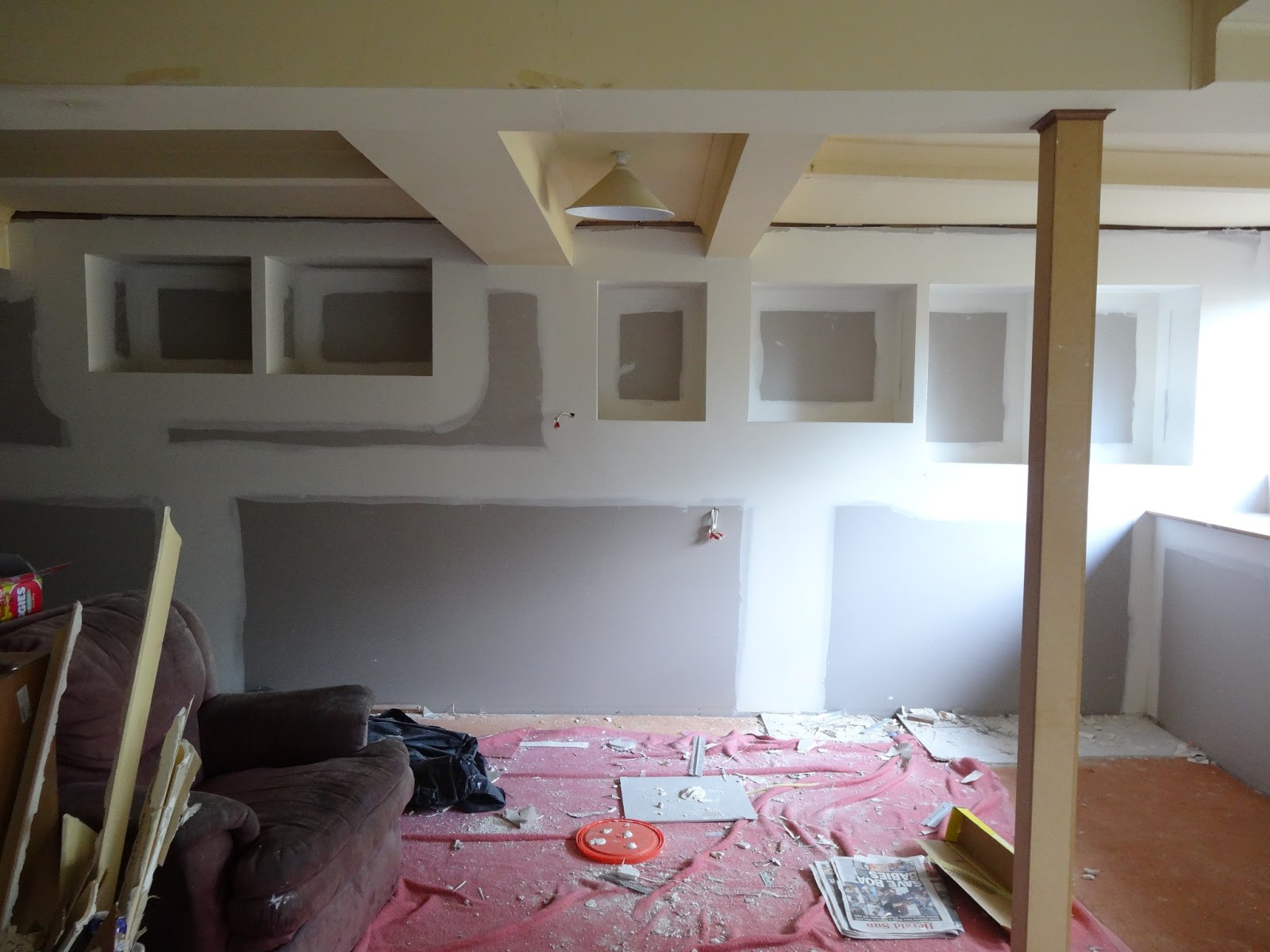 So I might be a bit quiet here for the next few weeks - between painting walls and finishing off my next magazine submission I'm going to be pretty flat out :o)

Oh, I did also want to mention that Peg at Sew Fresh Fabrics is running a Flat Rate Shipping Special through till next Monday 29th July. Shipping rates will be $3 US / $10 Canada / $12 International, refund will be processed upon shipping.
As ever, I'm a happy enabler :o)

Cool tablet pouches!
Your house is going to look fabulous! We have been in a state of renovation for about 7 years, it is never ending!

How exciteing. Me moved 2 years ago to a olde rhome also. I have been dieing to do some things..I did get the garage repainted and the living room repainted last year...But I so want to be abel to repaint everything else here...

YAY for plasterboard. It looks so much better already. I think you might be the only person on the planet who actually enjoys painting walls. Have fun!

How very exciting! Your rooms are going to be lovely! I hope you post the before and after pics when you finish. :)

New and fresh....never a bad thing! Your pouches are really nice!

Love the fabric choices for the tablet covers, and good luck on the renovations - how exciting!!

Nice! I love the green one with the castles on it. :)

The pouches look fabulous - love your Echino one!

I don't envy you the painting job, but it's going to be lovely!

the pouches. are great and the renovations look exciting. we've been here 27 years and are still working on rooms (husband is great at starting, and the first 75%!!!) but i really don't like painting, you can come and do mine? love the idea of a rompu s => craft room, UK houses just don't have that extra room :-(

Love the plasterboard transformation! And I love painting walls too! How dare you tell me about the flat rate shipping - I just spent my budget on batting and backing at Australian prices!!! Oh well, gotta support my LQS!

I'm so happy for you that you're getting plastered... ;o)

When I read plaster I was thinking the sticky variety to cover up cuts or the harder stuff that goes on broken bones! So relieved that neither are true!

Great - keep eyeing up that space girl! My kids were so untidy you couldn't get in their playroom so after several threats I took it over as my sewing room. Love it so much now though I am messy too -oops!

I like all those little recessed boxes. Love the Lizzy House, one of my very favorites as well. I also made my e-reader zip pouch just a smidge too small. Good news, it makes a great purse/electronic chord/traveling pouch :)

I appreciate you inviting me back to your blog. I haven't visited it for a while. I enjoyed this article. Thank you. Today I read a article that caught my eye. The article looks interesting. I provide detailed information about the topic. It took me a long time and effort to create this article. Please leave a comment! Click Speed Test – Check Your Clicks Per Second