One of the reasons I'm really excited about running the Decipher Your Quilt series with Leanne is that I really enjoy analysing the geometry of quilts and quilt blocks - so I have really enjoyed my 'research' for this week's post. Leanne and I will both be talking about 4 patch blocks this week; I am talking about how to identify 4 patch blocks and quilts, and Leanne is going to talk about some of the calculations that will help when drafting or re-sizing these blocks. These two topics go hand in hand - it is really important to understand what type of quilt block you are working with before you start re-sizing or drafting any block. So for the next few weeks, Leanne and I will be looking at a whole bunch of different block types, and give you some idea of how to manipulate them.

So, what I will be doing today is showing you a bunch of 4 patch blocks, and explaining why they are 4 patch blocks. I will also be showing you some mock ups of quilts made with these blocks, so you can practice looking for the blocks within the setting of a quilt top. While doing my research for this week's post, I've noticed that 16 patch and 4 patch blocks are often categorised together. For the purposes of this series, we will be covering 16 patch blocks seperately in a few weeks time, but it is worth noting they are very similar in structure.

I guess the best place to start is by explaining what a 4 patch block is. As the name suggests, there are several 4 patch blocks that are literally 4 equal sized pieces of fabric (or patches) sewn together, such as the simple 4 patch,

and the quarter square triangle (or hourglass) block. 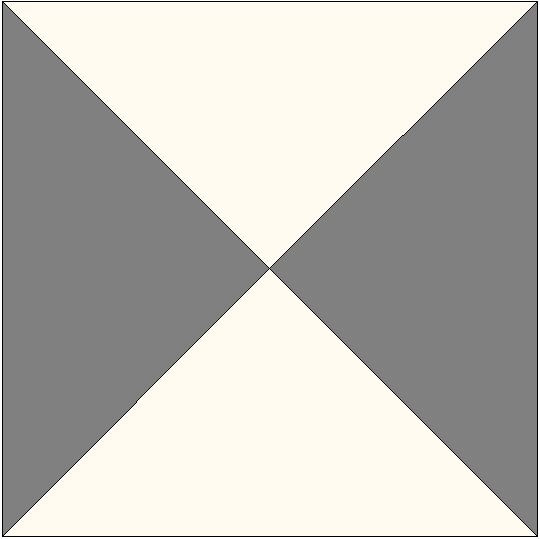 Generally speaking though, when we refer to a 4 patch block, it is any block that can be divided into a 2 x 2 grid, with four equal sized sections, such as the grid below.

The simple 4-patch quilt block above obviously falls into this 2x2 grid type, but each of the patches can be more complex than a single square of fabric. For example, the pinwheel block is four half-square triangles joined together in a 2 x 2 grid.

The traditional Broken Dishes block is made of the exact same components (4 half square triangles), arranged differently but still with the 2 x 2 grid layout.

If we look at quilts made from these two blocks, we need to look closely to see which of these blocks it is. This first quilt is made using the Broken Dishes block, arranged in a 6 x 6 layout. 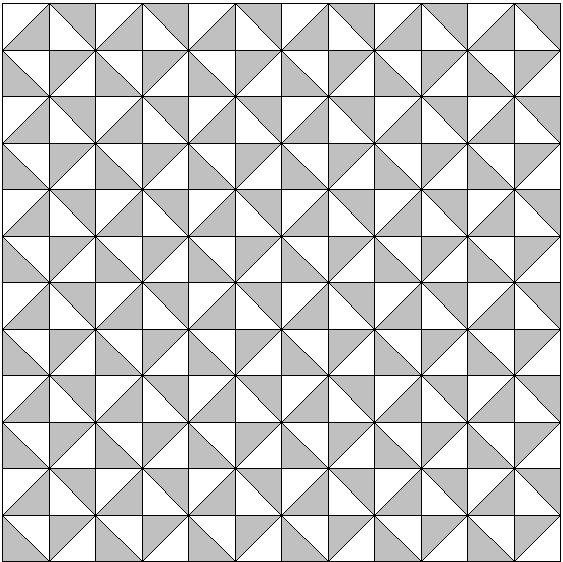 This second quilt is Pinwheel blocks, arranged in a 6x6 layout, and looks very similar to the quilt above. Having said that, once a variety of colours are used in place of the neutrals, the blocks would become more obvious. 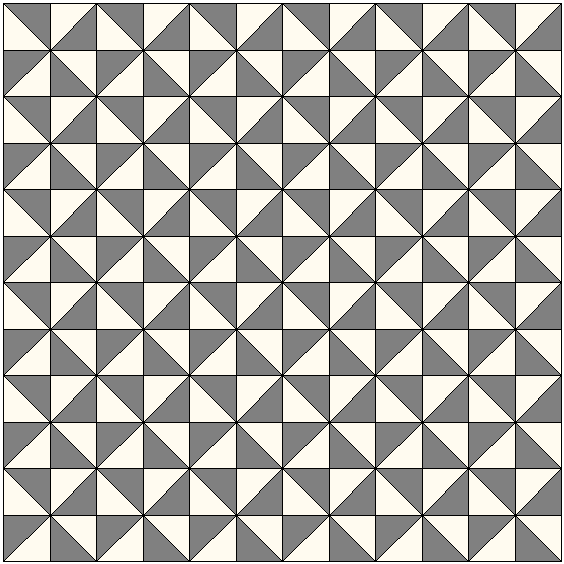 Another 4 patch made with half square triangles is called Birds in Air. Drawn like this, with the horizontal and vertical seam lines marked, it is easy to see how this block is a 4 patch with the 2 x 2 grid visible.

But if we remove those seam lines it becomes a little more difficult to see that it is a 4 patch - you need to visualise the horizontal and vertical seams through the bottom half of the block. The clue to it being a 4 patch is that on the top and left hand sides of the block, we can clearly see that the block can be divided into two equal sized pieces.

Birds in Air could be constructed using either of the above diagrams; as a 4 patch like the first diagram, or as a variation on a half square triangle like the second diagram. Regardless of how it is constructed it will still be a 4 patch block, since it is possible to superimpose a 2 x 2 grid on the block. When we look at Birds in Air laid out in a 6 x 6 block layout it is pretty easy to 'see' the blocks. 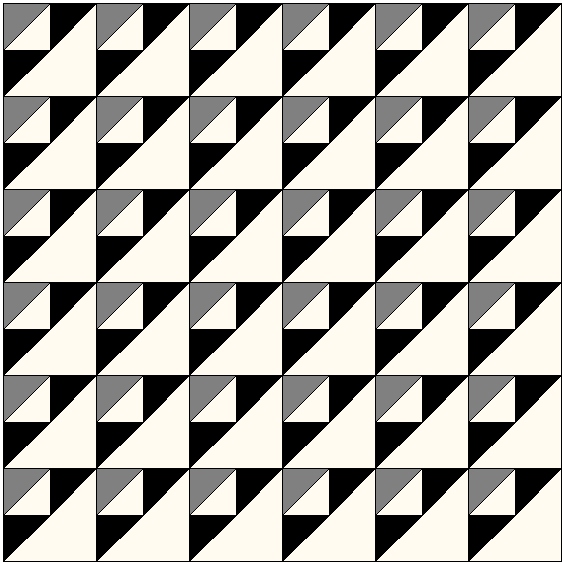 But, if every alternate block is rotated, it becomes a little trickier to find the blocks among the secondary patterns it creates. If you are looking at a quilt and you're finding it difficult to see the blocks within it, it might be that some are rotated. 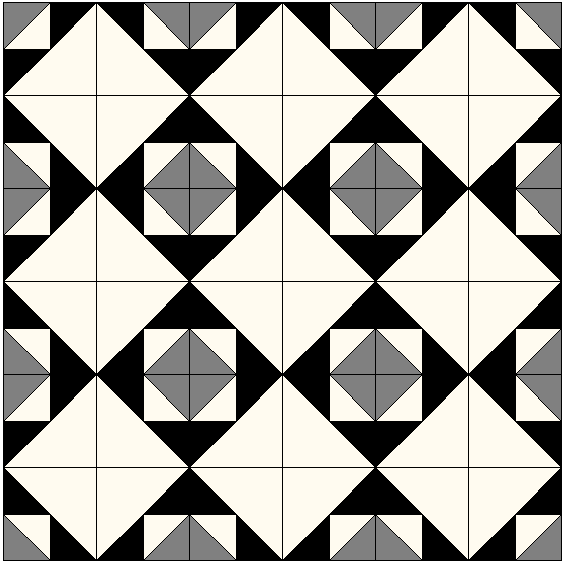 Another group of 4 patch blocks are those constructed from rectangles, such as the blocks below (creatively named Two by Two, Three by Two (also called Roman Stripe Zig Zag) and Four by Two).

These are all quite simple blocks, but can create some great secondary patterns across a quilt top. My favorite is the Roman Stripe Zig Zag, which creates a really interesting design. 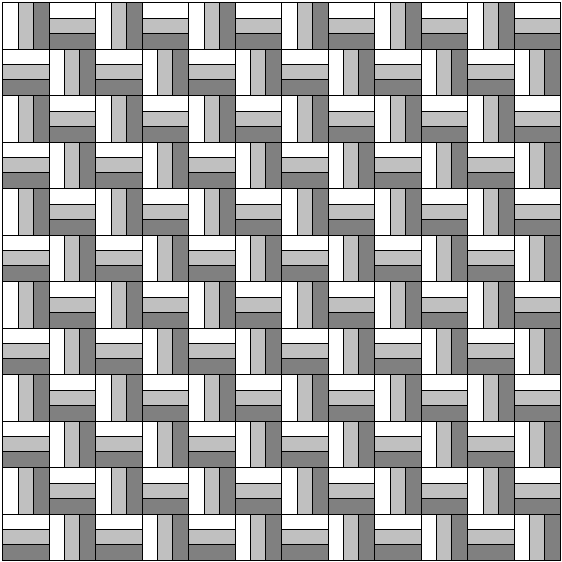 There are several 4 patch blocks that are far more complex than the examples I've shown you so far. Each of these blocks has unusual angles, and would be best constructed using either templates to cut the pieces, or by paper piecing the blocks. Tippecanoe (one of my absolute favorite blocks) is made using four paper pieced units, and because of the angles in the block, it creates the illusion of curves when several of them are joined together. You can find the templates and full tutorial for a 5" finished block here. 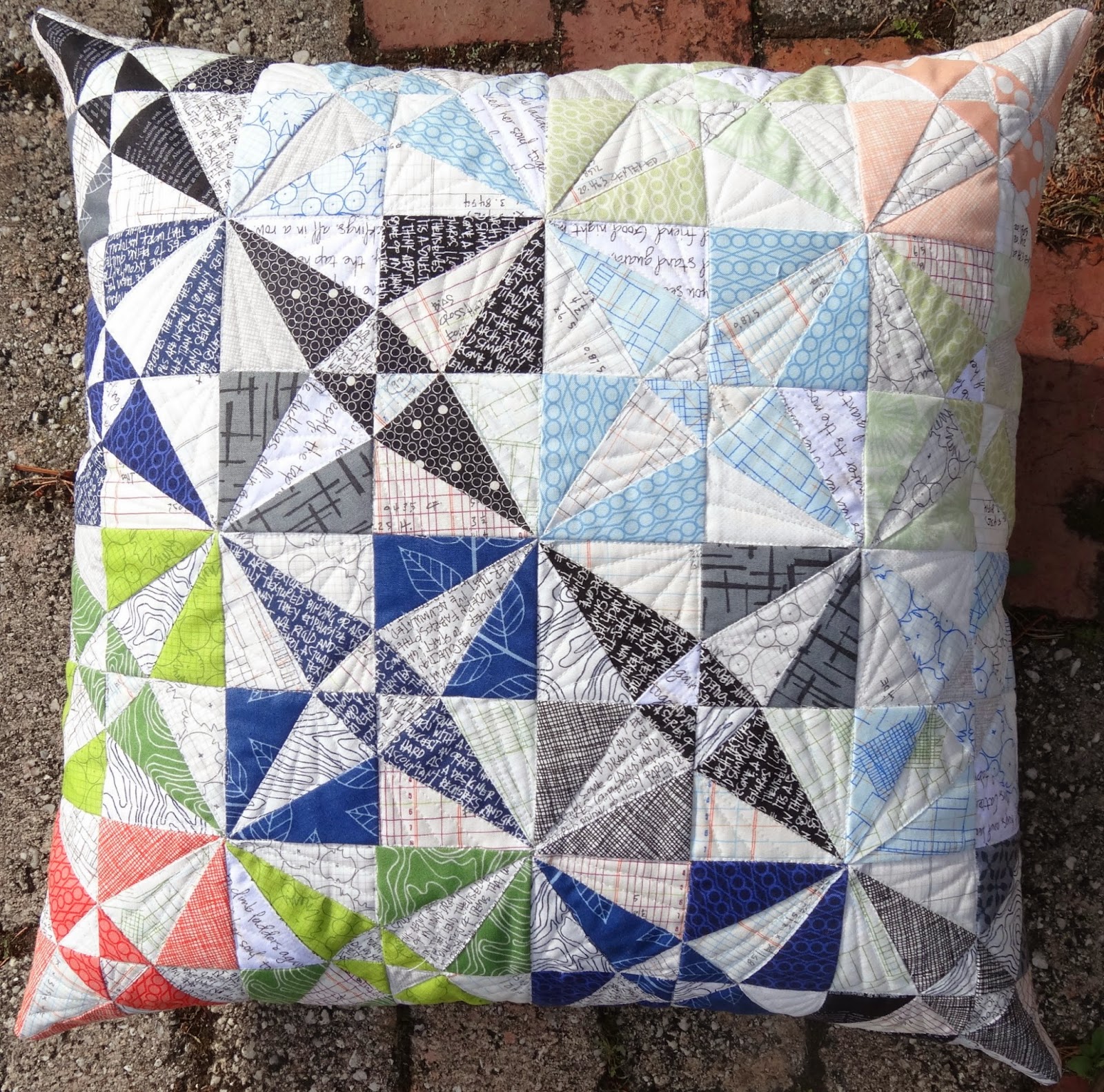 The St Louis Star block is another example of a complex 4 patch. Because of the unusual angles in this block, it is also a paper pieced block (full tutorial and templates available here). 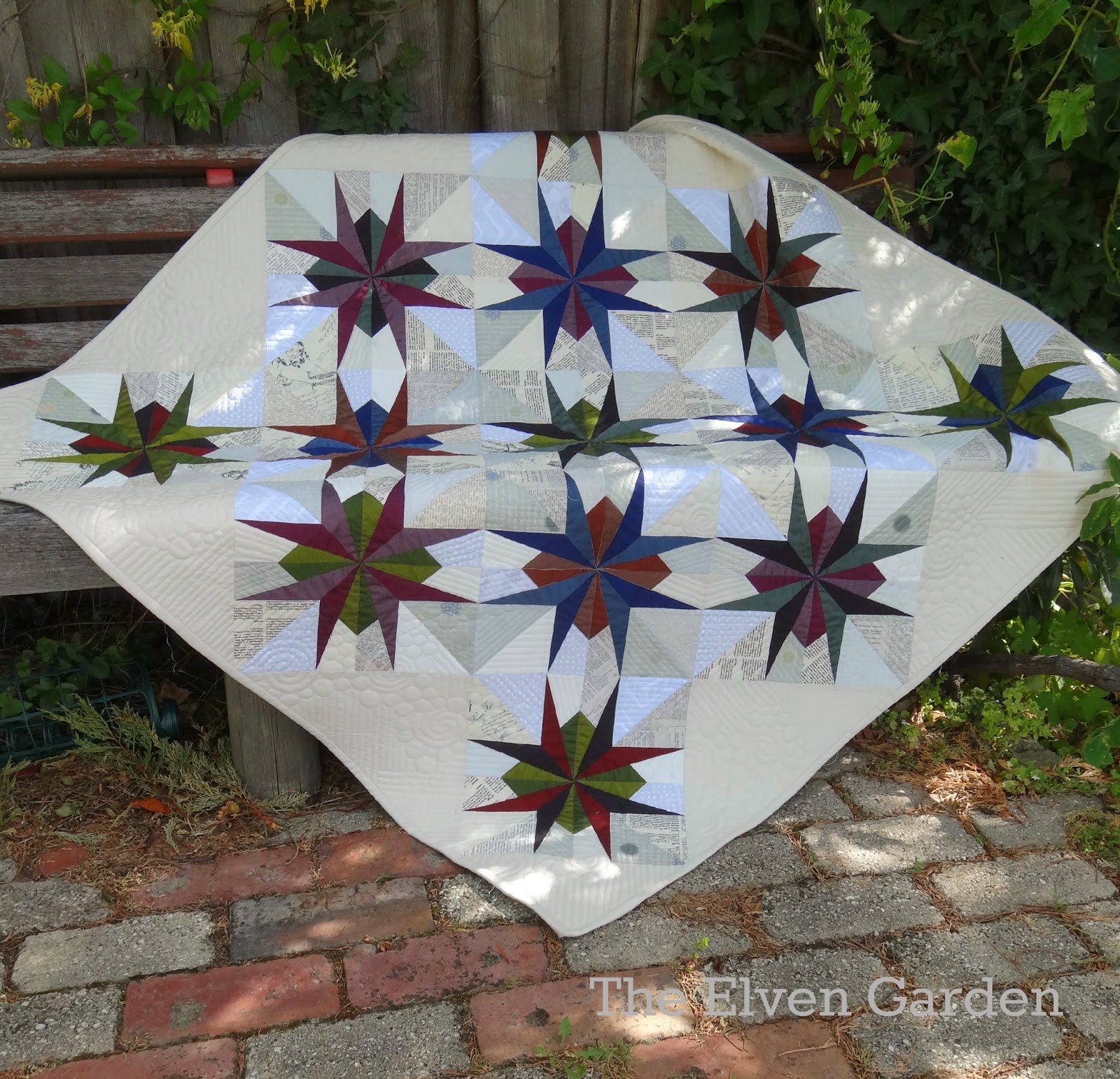 If you'd like to practice making some 4 patch blocks, I'm going to finish up with a mini tutorial for a Pinwheel cushion (or pillow). This one has been lurking in my UFO pile for a couple of years (which is why there are those huge fold marks across it), and was actually made using off cut triangles from flying geese. It would be the perfect project to use up charm squares though, as it starts with 5" squares of fabric. If you'd like to practice re-sizing blocks, it would also be a good project for that. 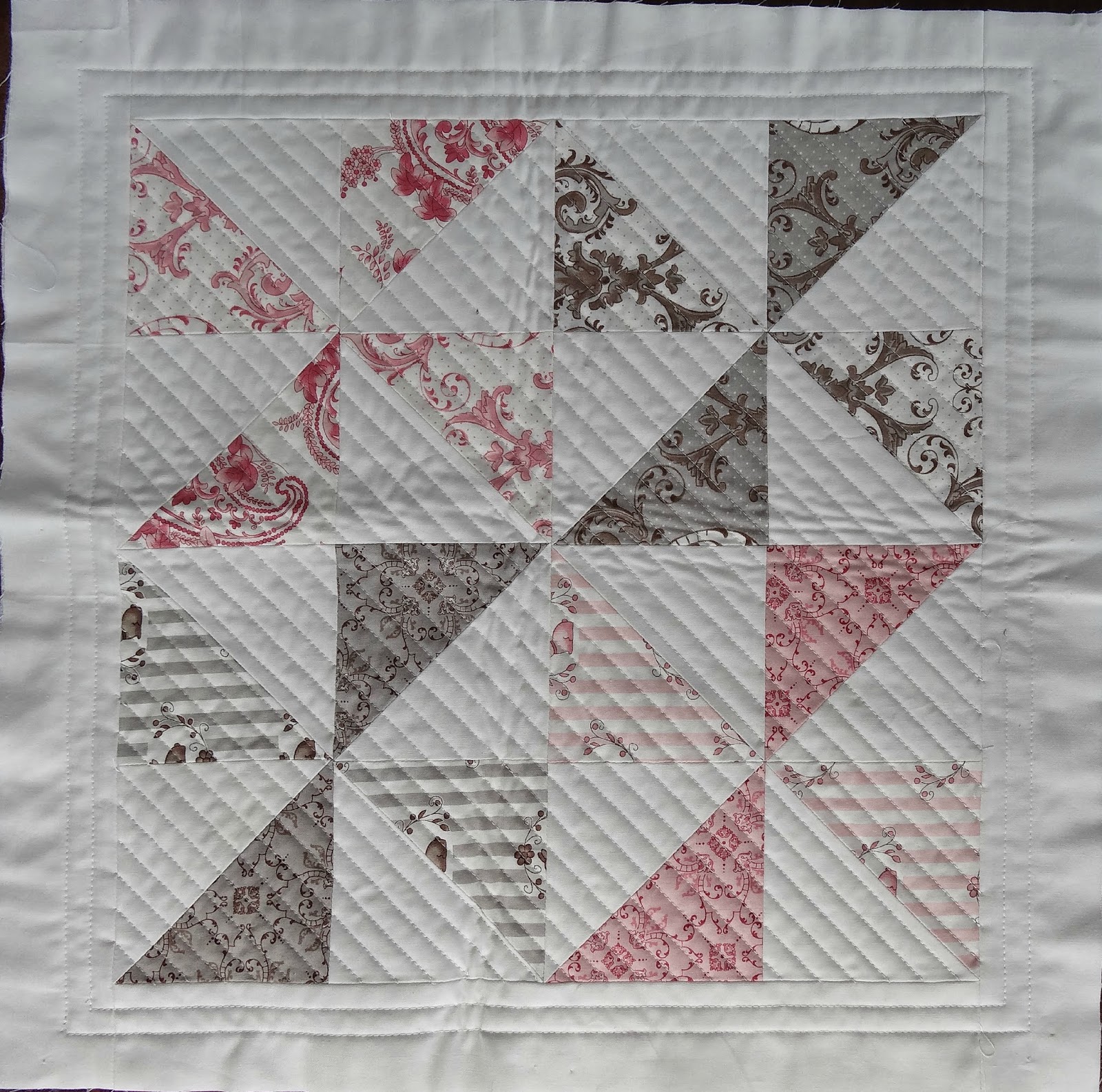 Make the HST blocks:
1. Using the HST two at a time tutorial, make sixteen HST blocks and trim them to 4.5" square.
2. Sew the HSTs into 4 patch Pinwheel blocks, measuring 8.5" unfinished. You will have four of these blocks.
3. Sew the blocks together in pairs, and then sew the two rows together as shown above. This piece should measure 16.5" square
4. Attach a 16.5" x 2.5" strip to both sides and press your seams.
5. Attach a 20.5" x 2.5" strip to the top and bottom and press your seams.

And you're done! You should end up with a 20.5" square cushion cover.

I hope today's post has been helpful. As always if you have any questions, please send me an email or leave a comment on this post and I will answer as best I can. I would encourage you to head over to Leanne's blog for her post on the calculation side of 4 patch blocks to learn a bit more about these blocks :o)

really interesting - I love seeing how the different blocks look across a whole quilt top!

It's interesting how many complex patterns can be made with just a simple 4 patch. No wonder quilters never get tired of making new quilts. You have explained this so clearly and I love seeing the blocks repeated into quilts.

Oh man!!! I have trouble visualising what a block will look like once in a quilt en masse so those mock-ups are super useful. I can't believe how different the birds in the air look once they are rotated. Brilliant, thank you@!

Oooh, my eyes went a bit funny with those broken dishes o.O Glad you had fun pulling this all together though :o)

Rosemary B here
I read this whole lesson last night on my iPad. I loved it so much. I am just a beginning quilter (sewing all my life) and usually I just dive in and start making. I love learning the math behind all of this, and identifying the pattern block, the sashing and such on quilts I see.
Thank you for these lessons I should really print this up or save the links so I can fully imprint this information in my brain. hehe