You might have noticed a not-so-little event kick off this week - the Farmer's Wife 1930s Sew Along, hosted by Angie of GnomeAngel. Angie has been working tirelessly for the last several months behind the scenes organising this sew along - and she has done a phenomenal job. Angie has thought of literally everything needed to make this sew along work smoothly, I absolutely take my hat off to her for taking on this massive year long project.

Angie has teamed up with Marti Michell and a bunch of bloggers (including me!), and we will all be sharing block tutorials for the 99 blocks over the next twelve months. It's a bit exciting to be honest - the Facebook group has hit almost 4000 members (!!), so it's definitely the biggest blog event I've participated in. The first three blocks were released this week - and there are tutorials by Angie as well as a couple of the guest bloggers. I've even managed to make my blocks for this week - I'm not sure I'll keep up over the whole twelve months, but at least I'm off to a good start! I've decided to use my stash of Suzuko Koseki prints for my quilt, along with a bunch of other coordinating prints as needed. It will be quite unlike any quilt I've made before - it's already an eclectic mix of prints.

Angie has organised the block schedule so we will be working from easiest through to hardest rather than working alphabetically through the book. So the first block - #12 Becky - was quick and easy to put together. I'm still not entirely sold on this block - but I'll wait till I've made a few more before I decide whether to remake this one or not. You can find the tutorial for this block by Angie, and tutorials for Becky (#12) and Bonnie (#16) by Lucy at Charm About You and Melissa at Oh, How Sweet. Co 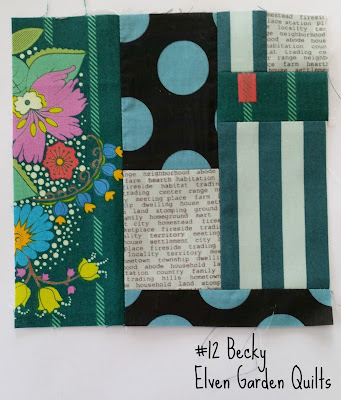 The second block - Bonnie #16 - was another quick and easy make. I'm really happy with this one - not my normal choice of colours, but it's nice to make a soft and pretty block one in a while :o) 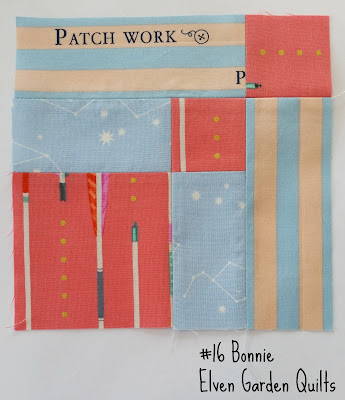 The third block - #8 Aunt - was a wee bit more complicated, but way more simple than some of the blocks to come ;o). I ended up paper piecing the centre part, and then rotary cutting the 'borders'. I actually changed the outer fabric in this one, as I wasn't happy with the first version. Angie has put together a tutorial for this block, along with the uber talented Jodi of Tales of Cloth (whose block is spectacular!!) This is my first version... 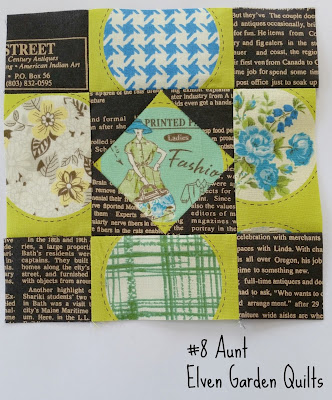 I'm much happier with how it looks now! 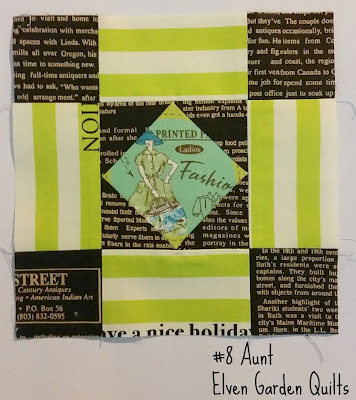 I'm really glad I'm participating in this sew along - I actually have the first Farmer's Wife book but haven't made a single block. I'm definitely the sort of person who needs a sew along to keep me motivated with this kind of quilt, and I'm really hoping I'll keep up over the next year. I don't have a great track record with finishing QAL quilts, but I'm determined to get this one finished!

I love SK fabrics, it's going to be fun seeing your blocks come together!

Love the change on the Aunt block. I am avoiding FPP as long as possible LOL.

Your blocks look great! And btw, the original Aunt one looked just fine to me. 😉 But then again, I'm all about wild and crazy SK style patchwork. Thanks for sharing your lovely work!

i am soo excited for this sew along! i had been intending on making the original fw quilt, and so am doing it now, concurrently. eleven fw 20s blocks done so far. fun!

Thanks for the share. Wonderful fabrics! I enjoyed making something simple for a change and concentrating on fabric selection. see ya next week!