So I've been sewing like a mad woman over the last week or so, and I have a few things to share today! First up, my Aviatrix medallion is completely pieced! I really struggled to get the full quilt in a photo (no helpers available, so I perched on a ladder), but you get the idea ;o) 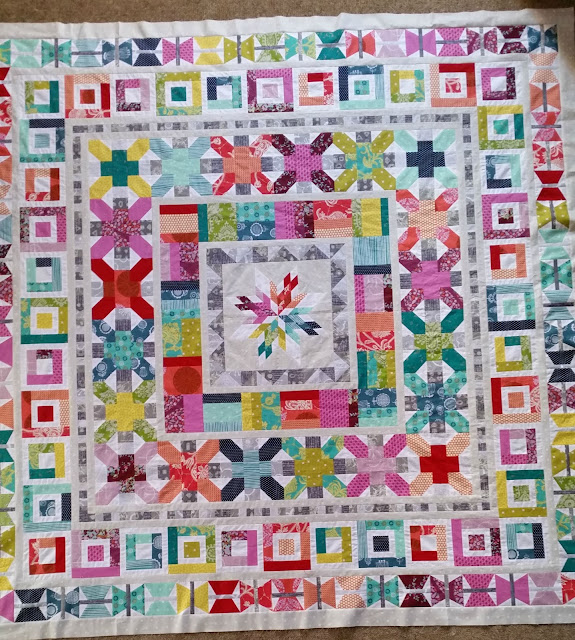 I ended up using my sidekick ruler and hexnmore rulers to cut the butterfly border, which made it super quick to cut. The did take a while to piece (simply because there are so many of them!), but it was well worth the effort. I absolutely adore this quilt - and it's basted and ready to start quilting really soon! I just have some horrifically overdue bee blocks to make, and then I'll be quilting this beast. The outer borders are a wee bit full, but I'm hoping some clever quilting choices will flatten it out (no idea what those clever choices are by the way - but I'm all ears if anyone has ideas!!)

Before I get onto my bee blocks, I needed to whip up a class sample for a Graffiti quilting class I'll be teaching at Frangipani Fabrics in a few months. I spent most of today working on this - and it was SO much fun. I'll be unpicking some of the really dense stitching (I guess you could call it thread painting) in the centre (which might take a few hours I reckon!) but other than that I am so happy with how it's coming together. I've always been a bit scared of using thread that doesn't blend - but this quilt is making me change my mind. It's the first true whole cloth quilt I've done, and I'm pretty sure there'll be more. I haven't enjoyed quilting this much ever! 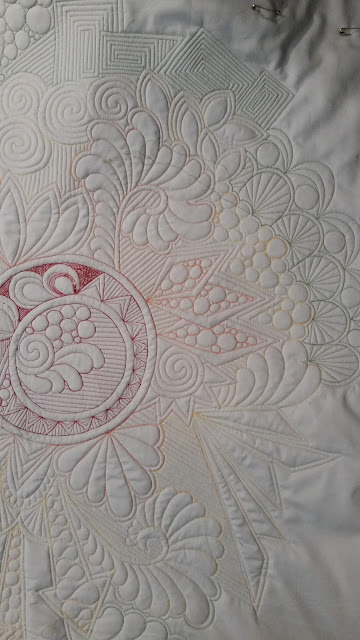 It's a bit hard to tell in these photos, but I'm changing thread colour as I move out from the circle (which I did mark - only that though, the rest is free hand). I'm using a range of Aurifil threads - some 50wt, some 40wt - and aiming for a rainbow effect. Some of the designs I'm using are based on Karlee Porter's Graffiti quilting book, but as I grow more confident with it, I'm trying to make it more 'me' than Karlee ;o) 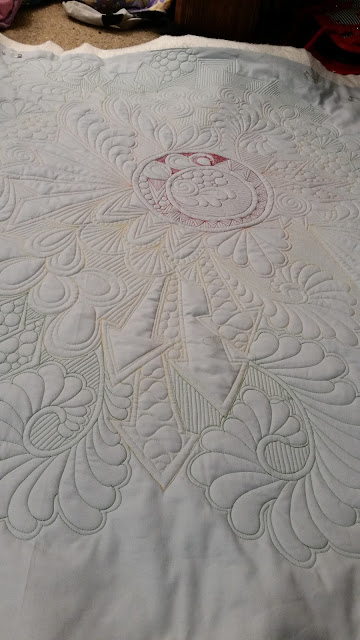 These photos are all a bit sub-par (as usual, night time quilting and too impatient to wait till tomorrow for good light!!) - but I promise I'll get some better ones when I've finished quilting this one. It is kind of addictive doing this kind of quilting - so I'll more than likely have this finished by the end of the week! 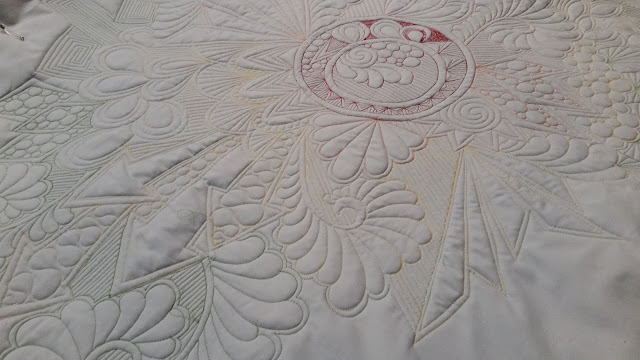 I hope you're all having a great week!

I'm linking up with Lee at Freshly Pieced for WIP Wednesday :o)

Quilting on your graffiti whole cloth is really interesting -- nice flow. I like how the different colored threads shade things. Looks like fun.

Congratulations on finishing the Aviatrix medallion - it looks like a lot of work but turned out beautifully.

Whole cloth quilting has really been calling me lately, too. I haven't really tried graffiti quilting, and I love that you are going for a rainbow effect with the thread color. Enjoy your quilting fun! :)

Hi Jess: Like always I'm really impressed and inspired by your quilting. It's wonderful that it brings you so much joy. Congratulations on completing the Aviatrix top which is quite intricate. It looks like it would have taken a long time.

Your whole cloth quilt is stunning. And I still haven't got past the centre of my Aviatrix Medallion. Seeing yours makes me want to get going again!

Both projects are amazing but your quilting - esp since you're working on a home machine! - is particularly inspiring.

I have been watching your quilting progress on IG and been loving it. My favorite part of the medallion quilt has to be those squares within squares though

Your Aviatrix top is wonderful, I love this pattern, I make one for my daughter and plan to redo it in another colorway. And your quilting is amazing !

I am absolutely in awe of anyone who can quilt like you do with a DSM!! Love your whole cloth...but I have no idea why you are frogging the quilting. Your Aviatrix quilt is beautiful...creative pinning to distribute the fullness, add a layer of wool batting along with whatever batting you usually use (two battings really take up fullness) and dense quilting will make this baby square!! Can't wait to see what you do with it!

Oh my word! The medallion is just perfection!

Oh my gosh - both are beautiful!

I love your medallion quilt - gorgeous colours. Can't wait to see how you quilt it :-)

I love the beautiful colours in your Aviatrix medallion quilt and your graffiti quilting is just gorgeous!

Both these pieces are Ahhhhmazing!!

Oh, my goodness, you've been so busy. Love the quilt, so busy and bright.

Just beautiful!
I love it.

I'm amazed that you can do such beautiful design freehand. And I'm very interested to see how you quilt your gorgeous Aviatrix quilt. It is so much fun to watch as you work -- thanks!

I love the medallion quilt, it's so bright and colourful and has such great borders. The graffiti wholecloth is amazing! Some great designs in there!