Since coming home from the show/fair last weekend, I've had an enormous amount of sewing energy. It's really nice - I think it's the first time since the end of last year that I've really felt that obsessive need to sew (or is that just me?) that normally drives me. It helps that I've been working on a project that I really love, I guess - my Aviatrix medallion.

I have been working on the blocks for the next border very slowly over the last few months (in between other projects), so they feel like they've taken forever. They are fun blocks to make though - and seeing these together made me think I'd like to make an x plus quilt at some stage. I am in desperate need of whittling down my enormous scrap box, and I although I struggle with true scrappy quilts, I think I'd like to make something a bit more controlled like this. Maybe... 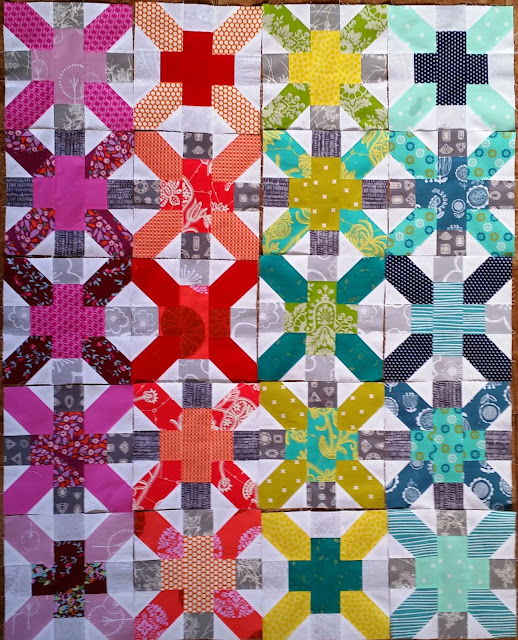 Once they were sewn, it was pretty quick to piece them together and sew them to the centre of the quilt - and it grew really big really quickly! It's around 50" square already, but there are only two more complex pieced borders to go, so I don't think it'll take too much longer to finish at the rate I've been sewing this week ;o) 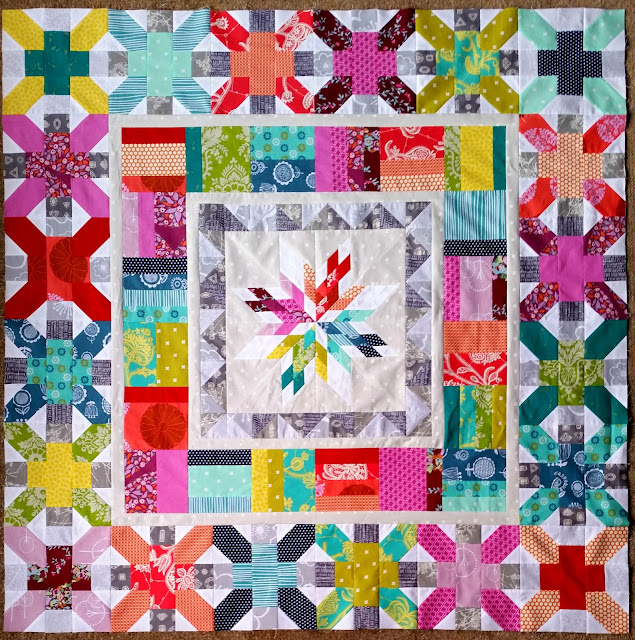 As I said in my first post about this quilt, I'm using the same colour scheme as Elizabeth Hartman has in the pattern, but I'm using prints instead of solids (except for the white background). I'm starting to get really excited about quilting this quilt - there are so many interesting shapes in the piecing which is going to make it loads of fun to quilt!

I hope you all have a great weekend!

It looks fantastic, Jess, and you are definitely not the only one who can feel an obsessive need to sew!!

I love the combination of prints and solids in the quilt. The colours are really well balanced. It looks lovely. I'm looking forward to seeing the quilting.

I passed on making this quilt earlier, during the quilt-along. Now, however, seeing yours has renewed my interest in making this beauty for myself. I have so many works in progress though - I can't really justify starting another. You know how that goes!! I can't wait to see yours finished - the colors are so vibrant. I'm a newbie quilter, but have enjoyed your blog for quite some time. Thank You.
Pamela

Sigh. so so lovely!

Such a beautiful quilt! The fabrics work so perfectly with the pattern and each other.

The cross-plus blocks look awesome together, but then on the medallion they make such a cool border! Love the mix of solids and prints you chose!