Decipher Your Quilt - a couple of clarifications

Today Leanne of She Can Quilt and I will be taking a slight detour from our scheduled Decipher Your Quilt posts to clarify a few points that we have covered in the series so far. I have had a few really great, thought-provoking comments left on some of my DYQ posts in the last week, so we've decided to explain these points further.

I am by no means an expert on quilt blocks, but I do have a love of maths and geometry, and it is this passion that inspired this series. Our aim is to help you understand how to identify what type of grid various quilt blocks are based on, and then be able to figure out the maths behind the block; this is this idea that's forefront in my mind when writing my DYQ posts.

One point that I'd like to clarify is in regards to uneven grid types. When I gave the 5-patch Shoofly block as an example of a 25 patch block, it was pointed out to me that in Barbara Brackman's Encyclopedia of Quilt Blocks this is regarded as an uneven 9 patch block.

If you look at the geometry of the block, it can indeed be considered to be an uneven 9 patch block (where the five centre patches are smaller than the four outer patches). However, it is also considered a 25 patch block (in other quilt block books and EQ7 for example) because it is possible to superimpose a 5x5 grid on this block.

As will all things in life, quilting does include some 'grey areas', and there is no right or wrong answer here - this block (and many others) can be considered either a 25 patch block OR an uneven 9 patch. The aim of our series is to show you how to work out what type of grid different quilt blocks are based on, and to then be able to figure out the maths involved. To me, it makes more sense to think of this block as a 25 patch to then be able to figure out what size the patches would need to be for a given sized finished block. But, if you are more comfortable thinking of it as an uneven 9 patch, and can get your head around the maths involved, there is no reason why you shouldn't think of it in these terms.

My post on identifying 16 patch blocks has also raised some excellent points. It was pointed out that the following three blocks (Crown of Thorns, Temple Court and Another Star) are constructed as 9 patch blocks, so how can they be called 16 patch blocks? 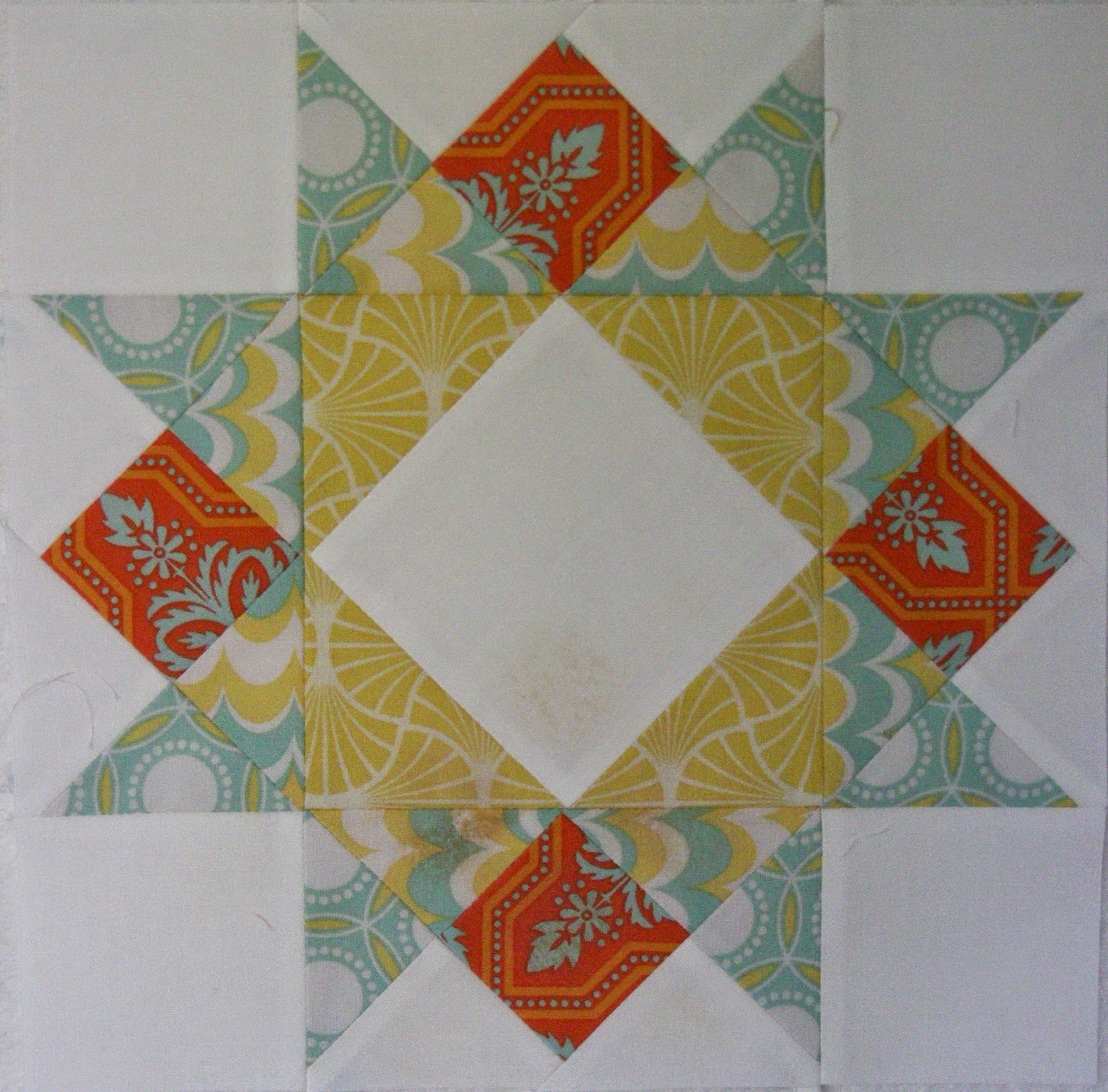 The simple answer is that how you put a block together does not necessarily relate to what type of grid that block is based on. As I explained in my post, these blocks are all considered to be 16 patch blocks because their symmetry and geometry is based on a 4x4 grid - they can all be divided into 16 equal sized squares. If you wanted to draft these blocks and figure out the maths behind them it would be critical to consider them as 16 patch blocks. For example, this is the Crown of Thorns block, with a 4x4 grid superimposed over it.

You can see that the underlying grid of this block is a 4x4 grid, which would be needed to figure out the size of each of the patches in the block. But, when you went to piece these blocks, they would indeed be constructed as a 9 patch (in fact, an uneven 9 patch), with three units across by three units down. It would make sense to piece the centre part of the block as an on-point square rather than four half square triangles, and to construct the four rectangular units as shown in the first image, rather than dividing them down the centre as in the image showing the grid. The important point here is that when figuring out how to make those units, you would need to be using a 4x4 grid, regardless of what method you wanted to use to put them together.

I hope this helps clarify these things - and thanks so much to those of you have been reading these posts, thinking about them and asking questions. That is why we are running this series :o) As always, if you do have any questions about anything we have covered so far, please leave a comment or send me an email and I will answer as best I can :o)

We will be taking a short break from our Decipher Your Quilt posts, and will be back on the 22nd of May talking about odd-ball blocks.

Yikes! My head hurts lol might need to read this a couple more times!

that makes perfect sense to me. I've been finding this series really interesting and pretty useful. I hadn't though in terms of 4-patch, 9-patch etc before this series. now I find myself trying to identify the blocks in all quilts that I see online! thank you!

Another good post full of useful info. It can be hard to decide on the underlying grid.