I did warn you I was a bit obsessed with making my Marcelle Medallion. And for those of you wondering if I'm actually sleeping at the moment? Let's just say there have been quite a few after-midnight bedtimes for me this week ;o)

I pieced together the orange/red bricks last night and then had a big moment of uncertainty. I considered replacing them with low volume bricks - but my IG peeps were the voice of reason. I stuck with the colour, and I am SO glad I did.

My camera (a very basic point and click) is having a few issues photographing the colours accurately - this photo is probably close to the true colours I think. 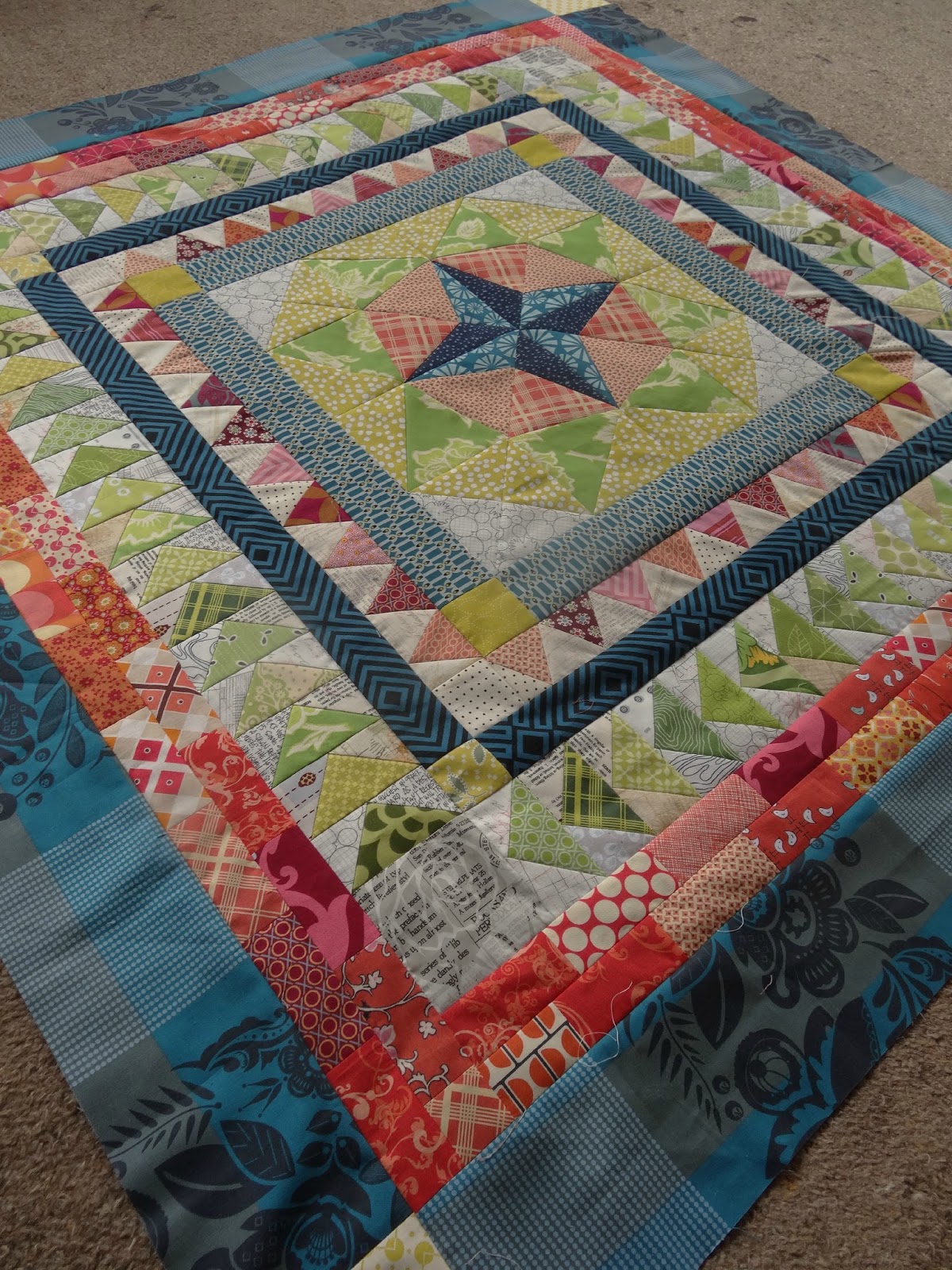 The wide border is a print from Anna Maria Horner's Good Folks that I had earmarked for this border the whole time I've been making it. It's a difficult print to use, since it's on such a large scale - but I think it works really well as a border print. 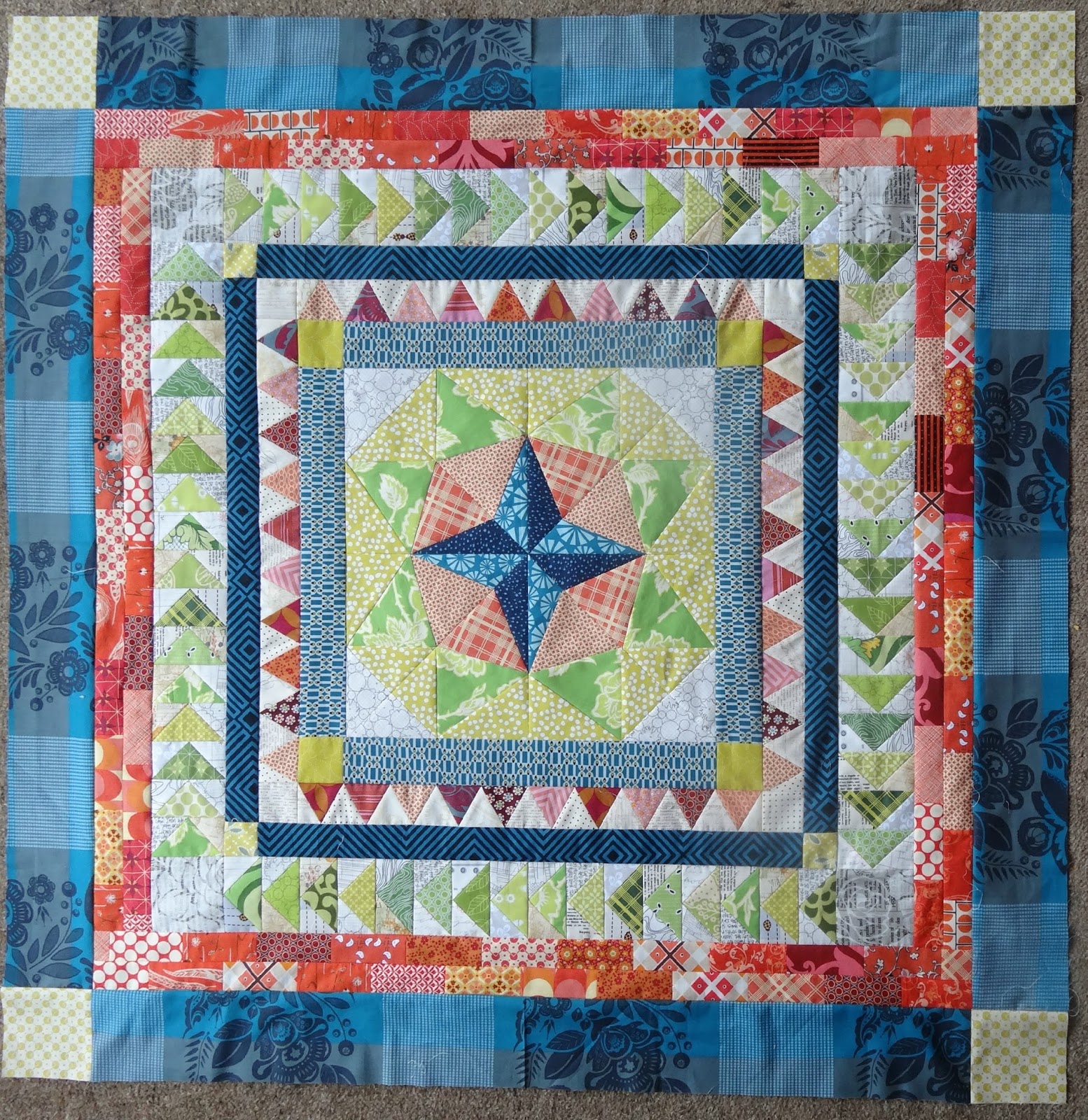 So, only two borders to go! I'm kind of surprised how quickly I'm putting this one together :o) Lest you think I've forgotten about the Full Moon Lagoon quilt, I haven't. I've been quilting it an hour or so at a time - so I'll do a progress post on that in the next few days.

Jess it is looking amazing! Each border is perfect!

I'm loving it. It's getting better with each border. What will be the final size?

Oh my! So fast! It's fabulous

Wow, obsessed indeed! It's coming along really nicely. To comiserate with you, my camera has similar problems - tends to shoot things off-colour, usually towards the blue side of things. Thankfully PicMonkey usually can solve it.

This is so fantastic, it just gets better and better.

This is just too gorgeous!

WOW! I love those borders! I wish I was on instagram! This is super gorgeous :)

again, gorgeous. I'm feeling a bot like a stuck record on this one!

You are sewing like a woman possessed- is there any other kind? This is looking fabulous!

So love what you are doing with this Medallion. The AMH blue border is fabulous! Love it!!!

It gets better each time we see it! Must find you on IG

Oh wow!! That AMH border is ridiculously gorgeous and completely perfect. This quilt is just STUNNING!! Sleep is overrated when making something this beautiful.

Your IG peeps were spot on, that border really zings. I have the same issued with my camera but with purples. I think you are a machine, some quilts are like that aren't they, you just want to keep sewing :)

Phew maybe I don't need to make this quilt as you are making it just as I would like to have done! Does that even make sense!?

Great quilt in other words!

If you'd tod me those were the colours you were going to use I'd have ummm'd and arrhhh'd BUT actually seeing them in sittue I think they're perfect, it works and the whole quilt is looking gorgeous!

Wow, this is simply stunning! The colors are lush and you are achieving wonderful balance.

Oh I just love the colors in your quilt

Love the AMH border! All your fabric choices are great.

It is soo, sooo awesome!

This is looking wonderful and growing so fast!

it looks fabulous! i'm really glad you stuck with the red.

ooo! And burning that midnight oil is paying off. This is turning out so nicely - and yes, that print is perfect for a wide border.

It is looking good!

Wow, yours is really beautiful, no wonder you are loving working on it!

I think this is my favourite of these so far! It's gorgeous, and so glad you stuck with the red and orange bricks.

This is so beautiful Jess! Really love the colours and fabrics you have used - they are just perfect!

Oh wow, that AMH print is perfect as a border. Love love love how this quilt is going. I would be obessesed too!

Just when you think it couldn't possibly get any more awesome... BAM! more awesome! Love the AMH!

You have made some beautiful colour/fabric choices and I love it! Can't wait to see the final reveal!

OMG I am dying right now because a) you've gotten so far (I just picked my center fabric last night!) and b) that AMH fabric is so hard to find...you are so brave to use it! Agh! This is looking GORGEOUS!

This is just stunning Jess!! Can't wait to see the next two borders :)
Amanda

That is so beautiful! I really like all of your fabric choices.