I don't often have quilty ideas that keep me awake at night - but this was one of them. Back in March, I started making the first few blocks in the Forest QAL, hosted by Julianna and Joanna. Other projects got in the way and I only ended up making three of the twelve blocks. The QAL finishes up at the end of this month, when finished projects using one or more of the blocks can be linked up.

I've been trying to figure out for a couple of weeks how I wanted to use the blocks I've made. As I was trying to get to sleep on Tuesday night, inspiration struck, and I spent a bit of time yesterday planning out how to go about it. So last night, after a few sketches and a fabric pull, I put together a quilt top. 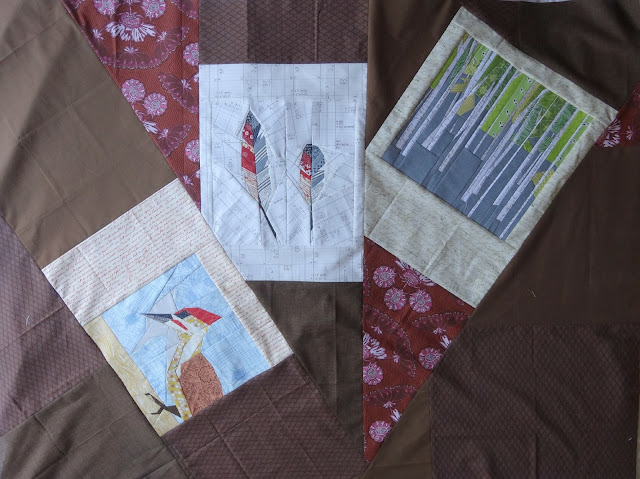 Apologies for the dodgy photo ;o) I started off by piecing sashing around each of the blocks, attempting to make them look like pages ripped out of a sketchbook. I then did a bit of improv piecing using a variety of chocolate brown fabrics, attempting to make them look as though they're sitting on a desk. I *think* it works? I'm considering adding some more brown to the top and bottom to make it square rather than rectangular, although I'm pretty happy with how it looks as is.

I'm extremely excited about quilting this one! No real idea about exactly how I will approach it, but I think it's going to be fun :o)

What an interesting arrangement! I look forward to seeing it come alive with your wonderful quilting!

It's lovely. These are some of my absolute favourite blocks, and you've done them beautifully.

such a fun idea - looking forward to seeing it all finished. Those blocks look so complicated!

I love night time inspiration! Such a fun idea.

Love it! Makes for a really interesting way to display the blocks!

What a great idea, I am looking forward to seeing it all finished.

Great idea! I look forward to seeing how you quilt it!

Woodgrain quilting and feathers spring to my mind! Have fun!

I was actually thinking about those blocks the other day - the look so beautiful, I agree woodgrain would look cool. I honestly thought you'd thrown down the blocks at first, not sewn them together so I think it's amazing!

Hi Jess! Your idea is fantastic! I'm sure this will be beautiful and unique! I have spent also many nights thinking and planning my Forest quilt which is almost finished. x Teje

Your quilting always blows me away. Can't wait to see what you do with it!

Love this idea Jess! Can't wait to see how you quilt this!

That is such a great idea making them look like pages from a scrapbook. I also seem to always get my quilt inspiration while trying to go to sleep.

Nice! I really like it! I am sure your quilting will be top notch too!

So fun and unique Jess. Your quilting is sure to be stunning!

What a cute quilt top! Awesome job, I love your blocks.

You could carry the desk theme through the quilting and add wood grain and a cup of pencils and paints, etc. I like it.

Nice approach! What a great way to use them. :)

Love your blocks. It'll be fun to see how you end up quilting it :)

Jessica, I like your blog and loved it on blogionaire.com