The last week has been a wee bit manic in terms of sewing. I've been working on four different quilts (two new quilts, my Aviatrix and a very long term WIP) as well as starting to prep for the Farmer's Wife Sew Along. I've said it before, and I'm sure I'll say it again - I love working like this, and flitting between different projects!

I haven't done all that much more quilting on my Aviatrix this week, but I'm so excited about how it's coming together you're going to have to look at it again ;o) I've finally finished quilting the x plus blocks - and I just love that border. It took a long time to do (I think about 15 hours give or take), but the effect of those geese was totally worth it. I'm so glad I decided to alternate the direction - I think it adds a bit of subtle movement. 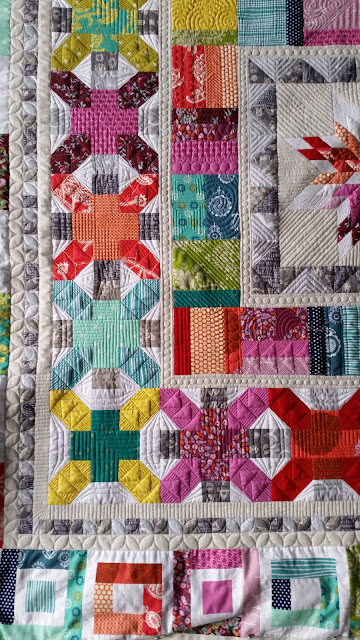 I didn't quilt the second solid border (the one just before the x plus blocks) until today. I asked what people thought would work on Instagram yesterday, and some amazing ideas thrown at me. Krista (who I was lucky enough to do a class with at Quiltcon, and who inspired the quilted geese) suggested an orange peel quilting design in the border as a nod to traditional medallion quilting. When Krista suggests something, you kind of can't say no (and I think it is a genius idea) - but the thought of doing orange peels in a 1" border didn't excite me all that much - plus I think I'd have to mark to pull it off, and I'm not a marker if I have the choice! Since the border beyond the x plus blocks had me stumped, though, I thought orange peels would be perfect there. The overwhelming response (and my instinctive choice) to that first border was pebbles again. So that's what I did :o) 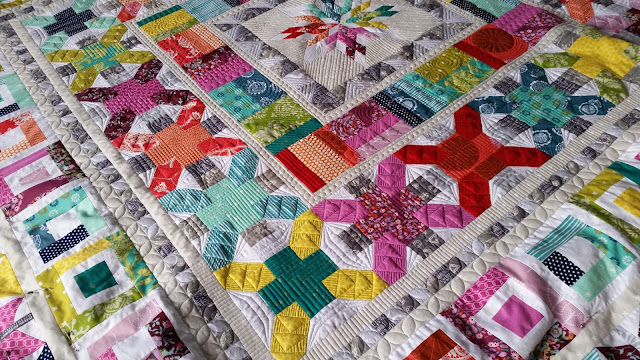 Because the neutral border is pieced squares, I used those as the grid for the orange peels, and didn't have to mark. I call that a huge win :o) I'm in the process of going back and quilting straight lines between the orange peels and the x plus block - and may continue this on the other side of the orange peels, I haven't quite decided. 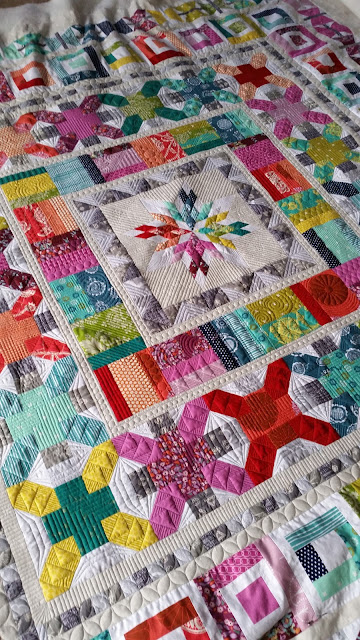 The long term WIP I've been working on is my Colour Block quilt made with Tula Pink's Birds and the Bees fabric, using Tula's free pattern she released when SaltWater came out. I pieced this quilt top about 2 1/2 years ago and I'm currently hand stitching the binding down, so I'm pretty excited that I'll be using it soon! 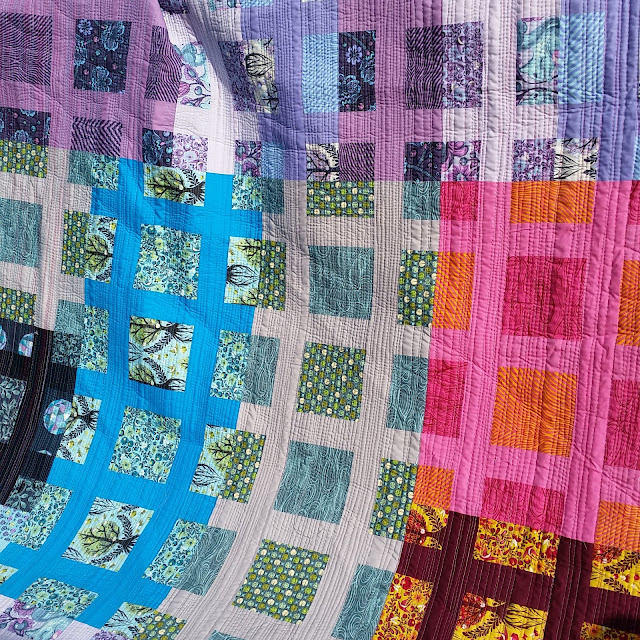 This is the biggest quilt I have ever made (about 85" x 96") and one of my favorites. The texture of the organic free motion quilted straight lines is just gorgeous - I'm looking forward to washing it (something I don't normally do straight away) and see what it feels like. I'm hoping it'll be done later this week so once I manage to get photos I'll do a proper post. 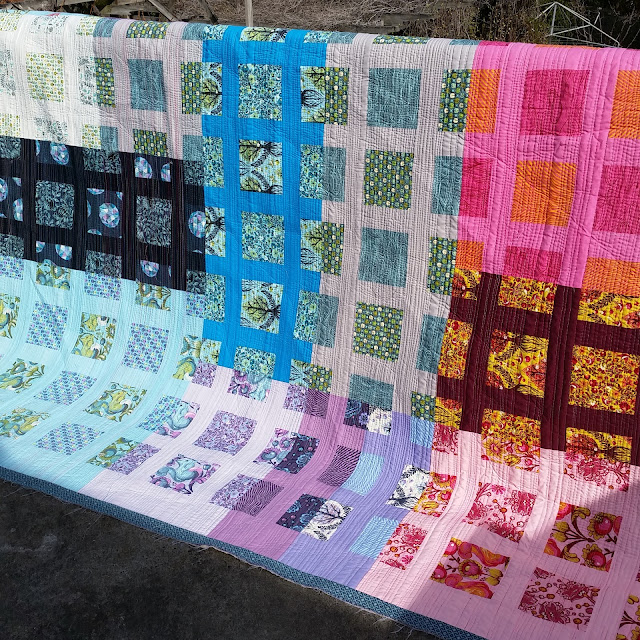 I hope you're all having a great week! I'm off to keep hand stitching binding...

The new borders are just perfect, your quilting choices are spot-on!

The Aviatrix quilt is turning out just stunning!! Really really inspiring and wonderful!

It is so obvious that quilting brings you a lot of joy... I love reading your progress updates! :)

Love that orange peel quilting! How do you get it so perfect? Well, actually, I love all of it -- your Aviatrix top, your quilting, your color block quilt. You have motivated me to put in a little more practice on my quilting this afternoon -- thanks!

oooooo!~! So in love with your Aviatrix - nice job there with the fabric choices and the quilting work on it! Congrats on finishing your Tula Pink quilt - that's going to be a huge smile to use. I'm the same way with thriving on a set of projects to move amongst rather than staying with just one at a time. You don't get feeling swamped with one never-ending quilt that way!

love the orange peel in the third border - you know I'm going to totally copy you right !!!! and love your colour block quilt - looking forward to the photos of this all wrinkled up !

So lovely Jess, I love it on instagram and love it here too. It motivates me to start mine soon after I finish dealing with my thesis. I cut the prices long time ago but never had the heart to start the centre.. But looking at yours, really makes me want to make this aviatrix.

Have fun finishing up the borders...
Hugs,
Amira

So lovely Jess, I love it on instagram and love it here too. It motivates me to start mine soon after I finish dealing with my thesis. I cut the prices long time ago but never had the heart to start the centre.. But looking at yours, really makes me want to make this aviatrix.

Have fun finishing up the borders...
Hugs,
Amira

it's looking amazing, I love your quilting style

Your quilts are so beautiful. They are like a little present for the eyes each time I read your blog.